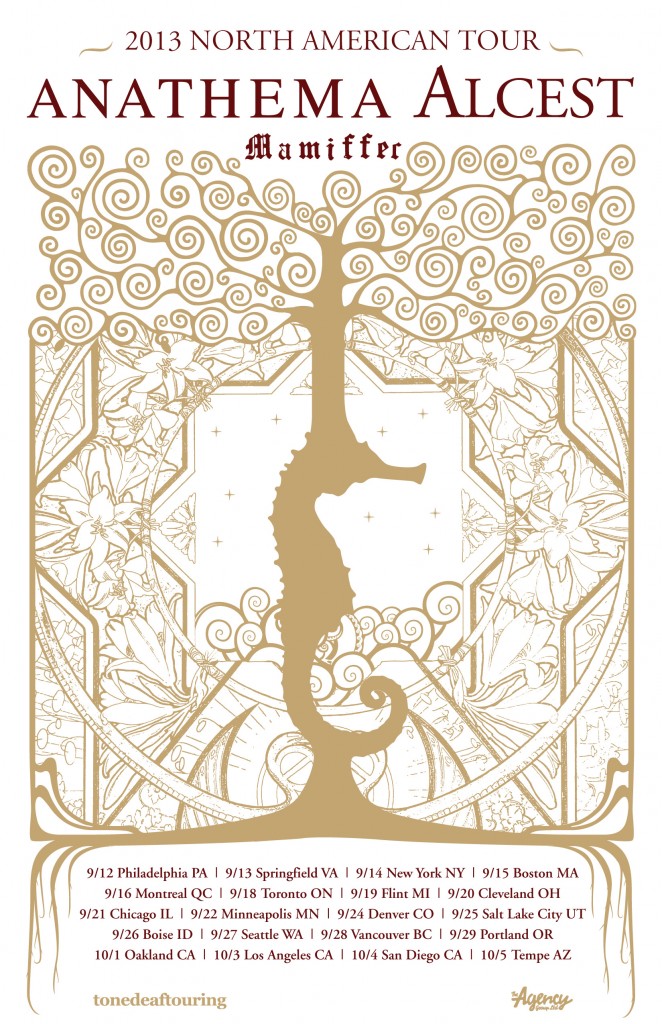 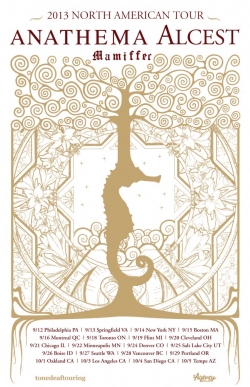 The English progressive rock troupe delighted its fans with some of its most beloved material.

With the release of last year’s Weather Systems, English sextet Anathema (which was founded by Vincent and Daniel Cavanagh roughly twenty years ago) further cemented its place as one of today’s best bands. A stunningly beautiful and detailed collection of complex, catchy, and cathartic pieces, it’s easily among the most emotionally gripping records you’ll ever hear (for more on that, check out my official review here). Recently, they embarked on their first official U.S. tour (alongside opening acts Mamiffer and Alcest). Their first show took place this past Thursday, September 12th, at Underground Arts in Philadelphia, and it was an incredible experience.

American duo Mamiffer started early and provided quite a foreboding and atmospheric experience. Shrouded in red light and smoke, guitarist Aaron Turner generated plenty of dissonance with his violin bow, complementing keyboardist/vocalist Faith Coloccia’s chilling dirge. The repetitious melancholy of black metal troupe Agalloch permeated throughout their set, and while it was a bit too noisy and monotonous at times, the overall vibe was powerful and affective. The audience enjoyed every second of it.

Soon after Mamiffer finished, French outfit Alcest came out and launched into some sorrowful chord progressions with equally moody effects. Truthfully, there was a definite Opeth/Katatonia/Nosound vibe to their formula, which included occasional growls and clever dynamic shifts (such as transitioning from heavy riffs to warm acoustic guitar arpeggios). There was also some impressive syncopation, as well as pleasant harmonies. The Cavanagh brothers walked around the back of the venue during Alcest’s set, and I was able to speak with them a bit, which was nice.

About forty minutes later, Anathema took the stage amidst deafening cheers from the audience. They began with “Thin Air,” the first track from their previous LP (and thematic sibling to Weather Systems), We’re Here Because We’re Here. Vincent’s voice was as angelic and powerful as ever, and Danny quickly went to the edge of the stage and ordered the crowd to clap along. Afterward, they played both parts of “Untouchable,” the opening two-part opus from Weather Systems. It was during the second section that female vocalist Lee Douglas was able to shine, as she poured her heart out to harmonize with Vincent.

The rest of the set continued to impress, with “Everything,” “Dreaming Light,” “The Gathering of the Clouds” (which was nothing short of awe-inspiring), “Lightning Song,” “The Beginning of the End,” and “A Simple Mistake” also representing the group’s last two records. Of course, Anathema also went back further into its discography by pulling out “Deep” from Judgement and the title track from A Natural Disaster. For an encore, they performed “Internal Landscapes” (the closing track from Weather Systems), as well as “Closer” from A Natural Disaster and “Fragile Dreams” from Alternative 4. Every second of it was amazing.

Unfortunately, Underground Arts isn’t especially big or lavish, so Anathema had to rework some of the material to accommodate for the lack of space and musical luxuries.  This resulted in slightly stripped down versions of several songs, which was a bit of a disappointment considering how lush and magnificent the studio versions are.  This isn’t a knock at the band or venue, though, as these things are quite natural and common in the realm of live music. Still, it was noticeable.

Having spoken with Vincent recently about the tour, I knew how much this first U.S. performance meant to the band, so it was no surprise to see how humble and enthusiastic they were on stage. Still, many bands this good and confident aren’t nearly as appreciative. To be honest, it was a bit surreal to hear some of these tracks live, as they’ve meant so much to me over the years. Anathema deserves to be at the forefront of the music scene in America, and with any luck this show (and the rest of the tour) will bring them closer to it.