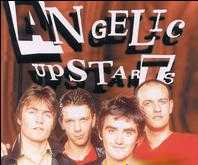 Show Review
Reviewed by Stephen Rafael
Move over Rage Against The Machine. For one night at least, the Angelic Upstarts -- the English group who introduced words like "neo-political" and "anti-fascist" into the punk rock vocabulary -- were back.

"It's been twenty years since the last time we played in Los Angeles," said Angelic Upstarts singer, Mensi, as he and his legendary band took the Troubadour's stage. "Do you think I can remember the words? If I forget them, feel free to jump onstage and sing them yourselves."

At first glance, however, it was uncertain whether Mensi was giving the crowd a sarcastic welcome "hello" or just flat-out asking the fans for help. Going by Mensi's appearance, the Angelic Upstarts seemed as if they had run out of gas long ago. Poor Mensi -- overweight, completely bald, and dressed in a goofy red-and-black running suit -- looked nothing like a reputed punk rock revolutionary. And the rest of the middle-aged Upstarts did not exactly inspire the crowd's confidence when they borrowed the opening act's amplifiers and drumset for their own performance. The veteran musicians, apparently, had left most of their gear at home in England.

But do not think for a second that any of this stopped the Angelic Upstarts from putting on a truly memorable show. Proudly highlighting their working class roots, the Angelic Upstarts opened with "Never 'Ad Nothing" and then launched into "Solidarity," an old song about the plight of the Polish people. And as fans young and old pumped their fists in the air and sang out the words to every chorus, Mensi quickly proved that time had done little to diminish his voice or ability to connect with an audience. While the Upstarts performed standards like "Machine Gun Kelly," "Kids On The Street," and "Two Million Voices," Mensi paced the stage, amused at both himself and the sea of mohawks in front of him. Between songs, though, and during "I Understand" and "England," Mensi was all business as he pleaded with the crowd to fight racism and show respect to all nationalities.

The Angelic Upstarts ended their set by playing their first single, "Police Oppression," which was originally released in 1979, and then covers of the Clash's "White Riot" and Sham 69's "If The Kids Are United." True to his word, Mensi handed his microphone to the fans and left the stage as they sang the final choruses of the last song. And following Mensi's exit, one can only hope that it will not be another twenty years before he and the Angelic Upstarts perform in Los Angeles again.