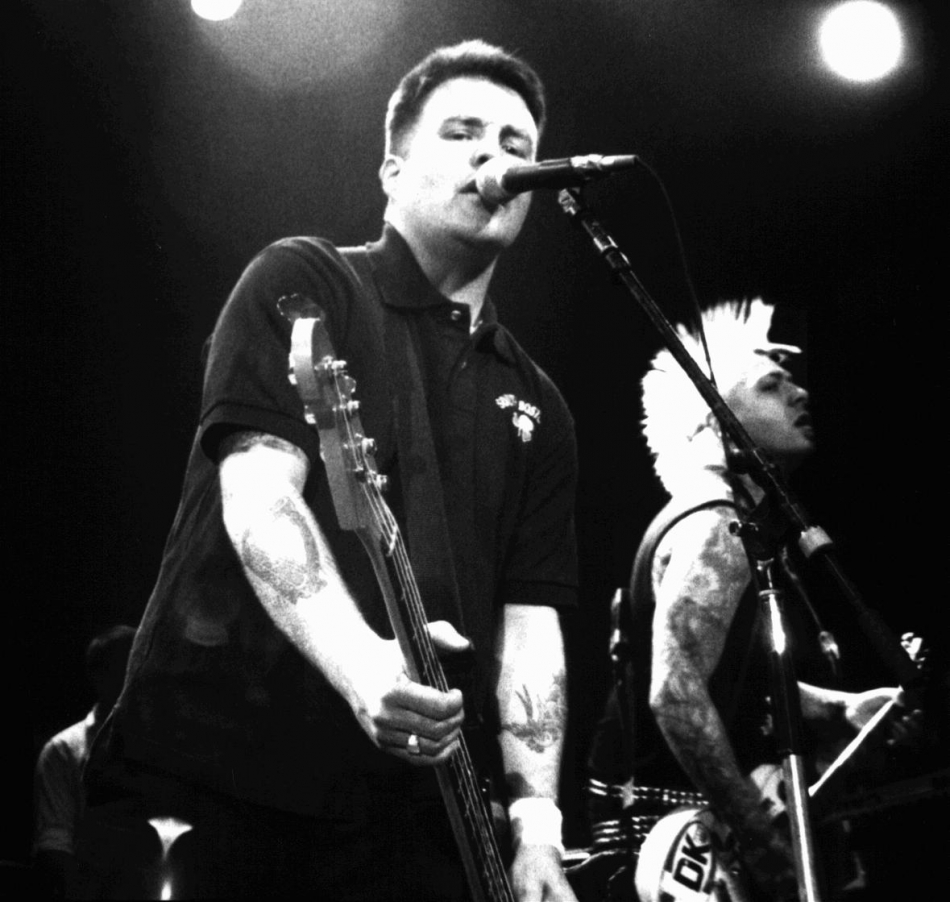 Show Review
Reviewed by Stephen Rafael
Don't call it the luck of the Irish... A dark cloud hung over the heads of the Dropkick Murphys, Swingin' Utters, Lars Frederiksen & The Bastards, and Reach the Sky as the four bands began the first of two sold-out shows at the Palace. Besides the recent passings of Frederiksen's brother, Robert, and the father of Bastards' drummer, Scott Abels, the Dropkick Murphys also found themselves short a guitar player. (Dropkick's James Lynch broke his left wrist when he was hit by a car.) However, perhaps taking notice of the Palace's Hollywood and Vine address, the Dropkick Murphys and friends followed an ages-old industry tradition: the show must go on. And fortunately, for the four groups' many fans, it did without a hitch.

After a short set by Reach the Sky, Lars Frederiksen & The Bastards hit the stage as the familiar spaghetti western theme from The Good, The Bad, And The Ugly blared out of the Palace's speaker system. Living up to the entrance, Frederiksen, who also fronts the punk group Rancid, took center stage with his dyed-blonde mohawk spiked six-inches high. The heavily tattooed singer-guitarist dressed entirely in black, except for his matching red shoes and suspenders. Not to be visually outdone, Bastards guitarist Craig Forgotten sported a similar fire-red spiked mohawk, and back-up vocalist/cheerleader "The Unknown Bastard" sang with his face covered by a menacing black knit ski mask.

Frederiksen, Abels, Forgotten, "The Unknown Bastard," and bassist Big Jay stuck to playing new songs off of Frederiksen's just-released solo record, Lars Frederiksen & The Bastards. All of the songs Frederiksen and his crew performed -- "Anti-Social," "Leavin' Here," "To Have and Have Not" -- were inspired by Frederiksen's small town, working class upbringing in Campbell, California. And seemingly in fine spirits, the always ready-to-rock Frederiksen made no onstage mention of the recent losses he and Abels had endured.

With the theme from the classic '70s cop show SWAT playing in the background, San Francisco's Swingin' Utters took the stage after Lars Frederiksen & The Bastards. Unfortunately, the Utters played mostly older songs instead of newer tracks from their excellent self-titled album, Swingin' Utters, which was released late last year. Singer Johnny Bonnel, guitarist Darius Koski, and the rest of the equally rough-and-ready Utters, however, did perform some new songs such as "Pills and Smoke," "Teen Idol Eyes," and The Rocky Horror Picture Show's "Eddie's Teddy."

Minutes after the Swingin' Utters left the stage, loyal Dropkick Murphys fans filled the Palace with their favorite "Let's Go Murphys" rallying cheer. And following a brief intermission, the house lights were turned low and traditional Irish folk music poured out of the Palace's speaker system. Then, kilted Dropkick member Spicy McHaggis appeared onstage alone and kicked off the Murphys' set by performing a short bagpipe solo. Seconds later, the rest of the Dropkick Murphys took their places and launched into "For Boston," the first song on their new record, Sing Loud, Sing Proud. And unlike the Swingin' Utters set, the Dropkick Murphys performance consisted of almost exclusively all-new material, including "The Wild Rover," "Good Rats," and "The Gauntlet."

Dropkick's athletic, jumping-jack singer Al Barr and everyman bassist Ken Casey were quickly joined on guitar by none of than Lars Frederiksen, who replaced the injured James Lynch. The hard-drinking Lynch, his left wrist in a cast, also made several onstage appearances and contributed to Dropkick's performance by singing back-up vocals. And while the Dropkick Murphys' set was both overwhelming positive-minded as well as explosively energetic, the Boston band did slow down to perform two memorial songs: "Forever," which Casey wrote for his late father, and "The Fortunes of War," a tune Dropkick dedicated to murdered teen, Brian Deneke.