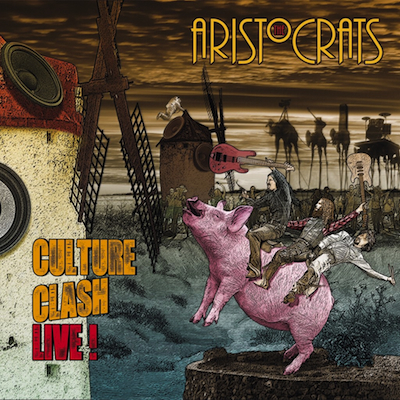 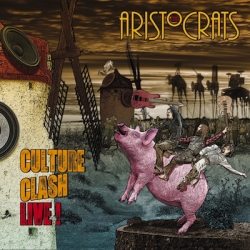 The Aristocrats continue to demonstrate a level of technique and humility that all musicians should aspire to, and Culture Clash Live! is a fantastic example of why.

A supergroup of sorts, instrumental progressive rock/jazz fusion trio The Aristocrats formed in 2011 and consists of guitarist Guthrie Govan, drummer Marco Minnemann, and bassist Bryan Beller. With such a high pedigree of musicianship between them, it’s no surprise that each Aristocrats release is met with very high expectations. Fortunately, though, they absolutely exceede them on their newest effort, Culture Clash Live! (which collects performances from six different venues during their 2014 world tour). A gripping sequence of funky rhythms, virtuosic intricacy, and endlessly joyous attitudes, the CD/DVD combo is a must own for fans of the style(s).

As you’d expect, each player was already reputable before joining for this project. For example, both Govan and Minnemann are revered session musicians, as well as members of Steven Wilson’s solo band. Meanwhile, Beller has played with Dethklok, Steve Vai, James Labrie, and Dweezil Zappa, among many others. Although they draw from a familiar pool of pioneers (such as King Crimson, Return to Forever, and Frank Zappa), their two studio records—The Aristocrats and Culture Clash—definitely give a unique twist to the formula, as well as much appreciated sense of humor (after all, the band is named after arguably the dirtiest joke ever told). On Culture Clash Live! they replicate selections from both their LPs exceptionally while continuously proving to be charmingly modest and carefree. It’s a thoroughly enjoyable experience.

The CD portion kicks off with “Sweaty Knockers” (yes, it’s that kind of show) from their debut disc, and it’s a killer opening. Govan storms in with hellish riffs while Minnemann and Beller dance around his flights of fancy with delicate yet focused syncopation and accents. There’s also a tinge of Judas Priest and Living Colour in the mix. Dynamically, they shift often between frenzied outbursts and eloquent tranquility; for instance, Minnemann exudes brilliantly restrained meticulousness as Govan builds what Frank Zappa referred to as “air sculptures” with his tasteful melodic lines. Unsurprisingly, the most impressive aspect is their ability to keep it all together in the midst of such hurried rhythmic shifts.

Later on, “Get It Like That” is all-around quitter and more somber (although there are still bursts of panicked flashiness).  At one point Govan and Beller play in unison, which is awesome, and the way they keep the audience in suspense with their shifts in intensity is masterful. Towards the end, they even begin using animal noises to [first] add some humor and [then] complement the arrangement. It’s a wonderful example of how artists can use levity to display humility and bond with their audience.

“Louisville Stomp” finds Govan erupting with some especially fast playing in the guise of a prog hoedown; in fact, it, like The Aristrocrats’ formula in general, seems particularly influenced by King Crimson’s seminal “Larks’ Tongues in Aspic, Pt. II.” Afterward, “Desert Tornado” is more sinister and schizophrenic, learning towards a more metal foundation. It showcases great unity between the three musicians, as it really sounds like they’re playing with one mind.

In addition to featuring alternate versions of some songs from the CD (including “Gaping Head Wound” and “Culture Clash”), the DVD features a few entirely different songs. It starts with “Furtive Jack,” an incredible composition that once again finds Govan and Bellar playing off of each other as Minnemann provides the percussive glue. Subsequently, Minnemann tells a funny story about the origins of “Ohhhh Nooo,” which once again demonstrates how informal and welcoming they are to the crowd.

Likewise, he explains how “Blues Fuckers” purposefully satirizes blues troupes (so it’s meant to sound uncoordinated and off-the-cuff at times, such as in the middle section). Interestingly, it has one of the most astonishingly tricky openings on the collection, as all three members storm in at once with a tightly arranged influx of spastic energy. They also incorporate sounds effects and plenty of eye contact to organize the start/stop passages and improvisation, which delights the audience. From there, they play three more songs that are also on the CD (“Louisville Stomp,” “Desert Tornado,” and “Living the Dream”), and although they’re repeats, it’s undoubtedly fascinating to see them actually play it. There’s also some bonus footage (mostly demos) in the special features that’s worth checking out.

Despite some inherent redundancy with the style (there are only so many ways to make each track feel unique), Culture Clash Live! is a thrilling assortment of exciting, complex, and very fun music. The sheer level of skill and preciseness required to execute this music is astounding, and the fact that the band is so tongue-in-cheek about it all makes it even more inviting and remarkable. Rather than exude godly egos and arrogant distance from their fans (as so much far less talented artists do), the trio performs these extraordinarily difficult compositions as if they and the crowd are just hanging out and shooting the breeze. All in all, The Aristrocrats continue to demonstrate a level of technique and humility musicians should aspire to, and Culture Clash Live! is a fantastic example of why.