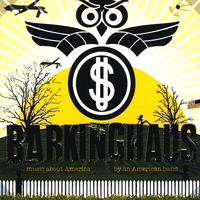 There were no parades, how the glory fades

Now he shoots lots of pool and as a rule

He wears a silly grin on his chin

It all started when

Zaz turned blue, what were we supposed to do

~ From Zaz Turned Blue by Was Not Was

Show me the way

To the next whiskey bar

~ From "Alabama Song" by Kurt Weill

~ From the song "The Future" by Leonard Cohen

The Sundresses have chucked the usual influences in favor of a deeper experience based way back when the roots of rock were little bitty shoots. This band blindsided me as the opening band at The Southgate House like pop gone beautifully wrong. At the end of the night, I remembered their lyrics and came away satisfied I'd heard something new and exciting. This three-piece band has a sound for the stage deep, strong and theatrical, and that new CD takes the show deep inside. Barkinghaus has the punch, power, and fearless dramatic truth-telling growl with a sound ranging from Tom Waits and Jim Morrison to Jerry Vale, Lotta Leyna and Al Jolson. They have a take-no-prisoners, big, nasty view of America from the POV of an American band. They preach from the faulty straw man pulpit or podium like some Country Joe MacDonald or Woody Guthrie gone punk playing swing era blues.

The magic of The Sundresses is they have two different minds for songwriting, two different spirits in the drumming and picking. The problem with a three-piece band is somebody normally dominates the sound and the concert is just about as interesting as that one imagination. I hear tell local fans of The Sundresses have favorites between the two, which means there's enough difference to create a delicious variety. Brad writes a scathing, straw man, ironic type of song so arch in its import the truth seems to spill out from his subject like a man drawn and quartered. Remy writes a descriptive song, like that kid Robert Zimmerman (stage name "Bob Dylan") made popular in "Idiot Wind" with a similar theology to Zimmy's "Highway 61." Remy is the jaded theologian of the group, and Brad is the more the rebel dissenting patriot. Brad's voice ranges from Tom Waits to Jerry Vale and Jimmy Durante, with his musical roots in Tin Pan Alley, the swing era, and punk. Brad's character-driven writing roots make him a switchblade of a theatrical writer like Kurt Weill's songs for those Bertold Brecht musicals, or Lotta Leyna, or Jimmy and The Doors with a touch of Jimmy Durante. Remy's roots are more roadhouse blues, Eddie Cochran, and punk icons like Henry Rollins or Jello Biafra. What pulls it together? They are both shooting down the same ducks, just from different angles and with different vintage guns. There's a remarkable switcheroo when these guys switch guitar and drums. You get two main courses in this movable feast. That's a hell of a meal.

Now, Mackenzie don't write the songs and only plays that P-bass and the trombone, but . . . I just got a call from my attorney advising me I've said enough about Mackenzie. She's young and part of the audience knew her when she was in Junior High, I'm just about grandfather age to her, so I'll just say her performance style rhymes with "hexy." She taught me an astonishing oxymoron I thought I would never say, " trombone." It's that dancing. That's the rock 'n' roll. A straight male punk rocker said something similar to me about Tony Sales when he plays that bass for Iggy Pop. Then he apologized by typing, "TMI." The bass is easy to play, but it's hard to feel. She's moved by the music. That's where the dancing comes from. The folks at Dewey, Cheatum & Howe have suggested I say no more.

The published roots of the Sundresses sound come from the 1930's through punk, but I hear a boatload of Kurt Weill and Lotta Leyna, Bertold Brecht and Stephen Sondheim built into a band with all that creative distance, character and drama. The sensual drumbeats suggest old school minstrelsy or burlesque shows. Their songs are a sucker punch at good old failed American certainty and bluster like to make some preachy Bruce Cockburn sound like a slick PC snake oil salesman. The truth is in the guts of the public, and never gets told except to spin people nowadays. This band I listen with my solar plexus live or on tape. I've heard something similar maybe once from Was Not Was with Zaz Turned Blue sung by Frank Sinatra Jr. or maybe Joel Grey in Cabaret. These guys have taken the mantle and broke it on the altar of an angry, cheated, hoodwinked patriotism and piety. Beneath this hard shell of just and honest anger is the soul of a nation raised to believe in an America no longer available to the general public, a church gone nuts from greed, and the painful message writ on the brail waffle iron of a failing economy.

No holds are barred, teeth are bared, and the music stomps out the ironic truth like to ring the Liberty Bell. This album is the strip show of that gussied up nonsense we've come to accept as news. Power has corrupted. Our geopolitical plan is worthy of Genghis Kahn or Pistol Pete. The news sounds like some carnival is missing a barker working Noam Chomsky's axiom, "If you can get them asking the wrong questions, you needn't worry about the answers." The forces that be don't fret if you catch them with their hand in the till. But they can't survive a joke. Barkinghaus offers the scathing irony to bring down the Ivory Tower: "We're dollar bills until we die!" Drum roll and a trombone to wake the dead. This album is a provocation.

Live this band has a punch. Brad Schnittger and Remy Spring each play guitar and drums, switching off mid-performance. Makenzie Place plays the bass and trombone, but there is no more interesting sight onstage than that flaming redhead pounding out the low tones in Harley Davidson boots bought from the St. Vincent De Paul, standing on the bass drum at the end and always, always providing the visual for the pounding power of the song. Brad and Remy share the songwriting chores and for my ears they keep the story straight like one great team always sticking the talking points with wit and bite. This band offers theater in the lyric and streetwise American rock 'n' roll against the machine. They are the road not taken to a brand new world where nothing is what you expect it to be, but you sure as hell got your money's worth. They are American ingenuity back from the dead. Compared to the Sundresses' unhinged creativity, most other bands are that same new thing.

(This review was written by Billy Sheppard of Billy's Bunker Music Reviews at www.billysbunker.com)