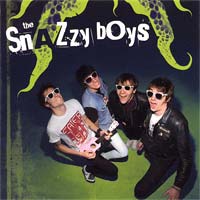 Album Review
Snazzy Boys
Label: No Front Teeth Records
Reviewed by Waxy Buildup
The Snazzy Boys are a, hum, a four-piece band from Italy that clock in 11 songs in 23 minutes on their debut album. The songs are catchy, fast and very punk pop. This is a solid first outing from these "snazzy" Italian boys.

Don't get me wrong these guys can play, but after many listens I couldn't help but think, "hey this song sounds a lot like The Briefs", the great and now-defunct Seattle power pop punk of recent past. But if you've never heard The Briefs then this is a moot point.

Still this record is a great listen, lots of energy, and for guys from Italy, their English is better then most Southern politicians. So, points for that guys! Also, 11 songs in 23 minutes is always a good thing.

It would be great if The Snazzy Boys could jump across the big pond and show us what they can do live. Now that's a show I would jump to any day.

Here's to the power of punk worldwide, may it never die.