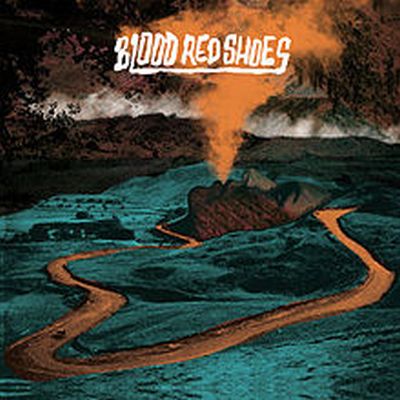 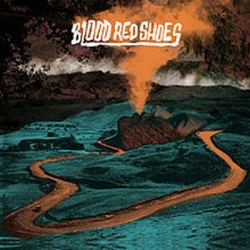 Laura-Mary and Steven crank up the rock and captivating vocal harmonies on their self-titled 4th album.

Over the course of four albums, Laura-Mary and Steven of Blood Red Shoes have refined their rousing rock sound, evolving with more complex song structures, lyrics, and emotions.  On their latest self-titled album they’ve winnowed down the shouty, short-phrase mantras and repetitive riffs of the past (with the exception of “Speech Coma”) and tempered their playful to petulant venting of pent up frustrations.  The emphasis is still on the rock, but calmer contemplations are blended into the mix.

Laura-Mary and Steven actually ‘devolve’ from their previous album In Time To Voices on this outing, employing thick ‘n’ heavy guitar fuzz and liberal use of megaphone-induced vocal distortion on several tracks.  The songs are close kin to, but cleaner and catchier than, songs on their preceding Water EP.  Case in point, lead single “An Animal” is a double-time floor stomper with a kicky beat and breathless pace, rife with the jaunty crash ‘n’ bash of cymbals and drums.  Laura-Mary and Steven even sneak in the profound lyrics that “No one wants to be alone.”

Laura-Mary gets her groove on on “Grey Smoke”, smoldering with a seductive menace against the tick of drum sticks.  She lays down a heavy, grimy guitar line that follows the melody of the verses, while Steve comes in to trade vocal lines with her.  Steven starts off in a reflective mood on “Far Away”, singing low-key amid finger-strummed guitar, while Laura-Mary beguiles, drawing out her words on the fuller chorus sections.  The pace builds up significantly over the course of the song with a light grind of fuzzed-up guitars, percussion, cymbals, and emphatic drum hits.

Laura-Mary and Steven crank through “The Perfect Mess”, ushering in wavering guitar reverb, the occasional stringing guitar line, a relentless drum beat, and exclaimed vocals from Laura-Mary as Steven shadows her on the lyrics “I can’t save you / There’s nothing waiting for you / You had your chances / A credit that you blew.”  Laura-Mary imbues her subdued vocals with a delicate sweetness on “Behind A Wall” despite its pressing tempo and intense guitar and drums sonics, and again on the moody “Stranger”, where she despondently elongates her words with a yearning flagellation against looped, chiming guitar notes and reverb drums (and a hint of horns?!).

“Speech Coma” harks back to the early days of Blood Red Shoes, at least in its really repetitive refrain of “I can’t get the words out.”  Steven snags the deserved spotlight on “Don’t Get Caught”, sing-talking softly against a strutting tempo and jags of speedy overdrive guitar.  The sonic progression (and sometimes deliberate regression), engaging vocal interplay, and enduring passion found on Blood Red Shoes raise the duo’s tunes high above the current congested rock band traffic.