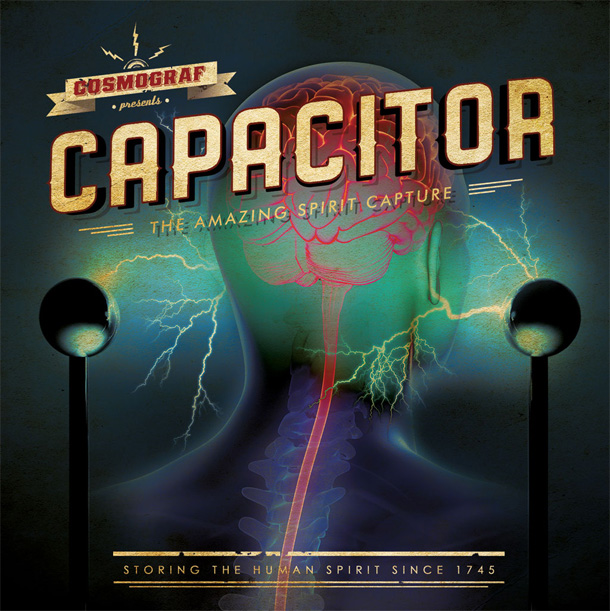 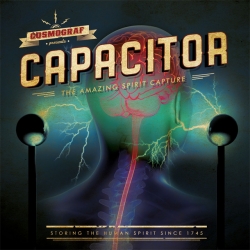 Given its penchant for psychedelic narratives and intricate arrangements, Cosmograf has always seemed perfect for the prog rock crowd. Formed in England and led by musical jack-of-all-trades Robin Armstrong (who writes, produces, sings, and performs most of it the music himself), the project’s previous few releases have all garnished fairly positive and ample reception, and with good reason. Armstrong’s confidence, skills, and direction always combine to produce something wonderfully familiar yet meticulously detailed, engaging, and prophetic. Luckily, his newest opus, Capacitor, proves that he’s as capable conductor of electrifying musical magic (ha-ha) as ever. Seriously, this is a damn fine record.

Armstrong describes Cosmograf as being “rooted in 70s classic rock with…obvious influences from classic progressive rock [artists]…,” including Pink Floyd, Genesis, Porcupine Tree, and Radiohead. As for the concept of Capacitor, its chief theme is the “storage of the human spirit, and how the imprint of our lives is left behind both in a spiritual and technological sense.” Judging by the complementary artwork, there seems to be a vaudevillian element there too, with Dr. Robert Merrill demonstrating his “Amazing Spirit Capture Machine” for all mankind.

Like fellow virtuoso Arjen Lucassen (Ayreon), Armstrong regularly utilizes the flair of several beloved musicians, and this disc is no exception; among the troupe are guitarist Matt Stevens (The Fierce and the Dead), drummer Nick D’Virgillio (Big Big Train, ex-Spock’s Beard), keyboardist Andy Tillison (The Tangent), and bassists Nick Beggs (Steven Wilson, Steve Hackett) and Colin Edwin (Porcupine Tree, Henry Fool). Clearly, there’s a ton of talent here, and every bit of it is put to great use, especially since their contributions serve only to benefit the material (rather than to steal the spotlight for their own egos, which is often the case in situations like this).

Capacitor opens with “The Spirit Capture,” a multifarious, ominous, and extremely colorful introduction during which Armstrong allows one speaker to state his authoritative context while another delivers rebellion. The former asks, “So what happens to the energy in our bodies when we die? Do we actually become…a ghost?” while the latter interjects with “You can’t destroy me. You don’t know what happens when we die…I am a ghost.” From there, Dr. Merrill addresses his audience as he performs an experiment. Meanwhile, the music fluctuates constantly between heavy riffs, spacey eccentricities, and instrumental flair (particularly at the end, when a jazzy keyboard solo brings a compassionate, fun side to the show).  These dynamic shifts are exquisite and really demonstrate the versatility of Cosmograf (although it easily evokes modern IQ and Eloy as well).

“The Fear Created” begins with a nightmarish narration akin to Porcupine Tree’s “The Incident.” There’s also a nice balance between macabre acoustic guitar arpeggios and symphonic metal archetypes, all the while featuring Armstrong’s distinctively fragile yet classical singing voice, which he stretches as far as he can to heighten the drama. It’s quite effective. Later on, “The Drover” offers a more pensive, vivid, and tuneful prospect, with his central chord progression and melodies finding wonderful accompaniment from the band, as well as some lovely production layers (including dreamy echoes). It’s probably the most accessible and warm track here, which makes it a perfect centerpiece too.

Afterward, “White Car” proves to be among the most ambitious and complex compositions on Capacitor (it’s also the longest), with a genuine sense of emotional dread throughout. It details the premonition and aftermath of a hit-and-run accident that injured a girl. Its theatrical nature, including commentary from Katharine Thompson as “Voice of the Medium” and the call-and-response dialogue device, makes it feel like a scene from a rock opera rather than just a run-of-the-mill prog rock song. In addition, its chaotic tonal shifts keep listeners on their toes throughout, as tranquil passages bled into dense rhythmic assaults, which are then broken by otherworldly harmonies. It’s masterful, as are the two pieces that conclude the album, “The Ghost Gets Made” and “Stuck in the Wood.”

Capacitor doesn’t necessarily break any new ground in the genre (does anything anymore, though?), but it still manages to claim its own identity by incorporating such a wide array of influences and outside heavyweights. It offers a thoroughly compelling tale for listeners to explore, as well as an impressive concoction of rich ideas, seamless transitions, and steadfast playing. This record truly feels like a labor of love, as well as a considerate nod to the aforementioned classic pioneers. Armstrong is certainly a valuable contributor to the field, and Capacitor should help his star shine even brighter from now on.