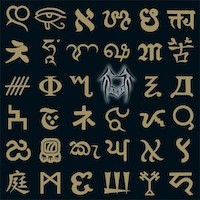 ‘Master of Disguise’ is pretentious, lavish, extraneous, complex, ambitious, and undeniably silly (whether intentional or not). However, that’s precisely what makes it sort of awesome.

Billing itself as “a new genre of music – progressive darkwave,” New York City outfit Braindance is certainly ambitious and confident. With its fantastical narratives, ‘80s power metal vibe (complete with blisteringly fast guitar solos), electronica coating, and perhaps most distinctively, deep, overblown vocals (courtesy of founder Sebastian Elliott, whose timbre, it must be said, evokes that of Family Guy creator/actor, Seth McFarlane), their music is undeniably authoritative, grandiose, and quite eccentric. On their fourth LP, Master of Disguise, they craft a concept album that’s as cinematic as it is musical, with tight arrangements and exceptional musicianship throughout. However, the repetitious compositions, as well as an inherent cheesiness factor, may detour some listeners.

Braindance formed in 1992, when Elliot aligned with producer/guitarist Vora Vor to start a project that “[combined] goth, industrial, electronic, synthpop, darkwave . . . progressive metal, progressive trance, vocal house, and modern classical music.” Without a doubt, each of these elements pervade Master of Disguise, giving it a fairly idiosyncratic texture overall. Story-wise, the album seems to deal with the psychological issues of its protagonist; in addition, there seems to be an Egyptian theme. Aside from that, not much is apparent.

The record begins with “Unearthed,” an atmospheric preface comprised of sound effects (such as explosions and metal rattling) and delicate orchestration. It effectively sparks anticipation and drama, and it segues into the bombastic “Lost” (and then “Eye of the Storm”) well. Here the instrumentation combines with more sound effects to create an intense and multilayered environment, blending futuristic dread with ancient progressive metal foundations. Of course, Elliot’s melodies are catchy, and his lyrics, while fairly on-the-nose, set up the context well. Again, the level of theatricality (especially in Elliot’s performance) makes it difficult to take its intent seriously, but the group’s virtuosic playing, as well as the level of dedication and inventiveness in the production, makes it a remarkable beast nonetheless.

For the most part, Master of Disguise follows this template for the remaining 70+ minutes, but there are some noticeable deviations. For instance, “Hunter and Hunted” is an moody, orchestral Middle Eastern instrumental that builds exceptionally while incorporating a lot of effects and voiceovers; in a way, it sounds like a lost track from Pain of Salvation’s BE or IOEarth’s Moments. It’s followed by “Dysphoria,” a short expository track that consists entirely of clips from films, including several phrases from Arnold Schwarzenegger, as well as bits from The Matrix and Fight Club. Honestly, it would work better if the actors and selections weren’t so identifiable, as it’s this recognition that pulls listeners out of the listening experience.

The highlight of Master of Disguise is the “Valley of the Kings” three-part suite. The first chapter, “Beyond,” is a lot like the previous metal monsters, except that Vor’s backing vocals, which complement Elliot’s lead nicely, are given more attention. The middle part, “Falling,” succeeds because of its symphonic nature and operatic harmonies. Lastly, “Closer to the Sun” concludes the sequential trilogy with a sparser, more foreboding agenda. By the end, its tribal electronic percussion and multilayered construction makes it quite dense.

All in all, Master of Disguise is pretentious, lavish, extraneous, complex, ambitious, and undeniably silly (whether intentional or not). However, that’s precisely what makes it sort of awesome. The way its intricate musicianship, retro ‘80s power metal veneer, and commanding vocals make it feel simultaneously serious and satirical, as its creators must know how absurd and overly striving it all is. Still, Braindance does an exceptional job of handling its art with the utmost sincerity, skill, and attention to detail, and fans of this style will find plenty to enjoy.

“The Heart of a Dark Star”