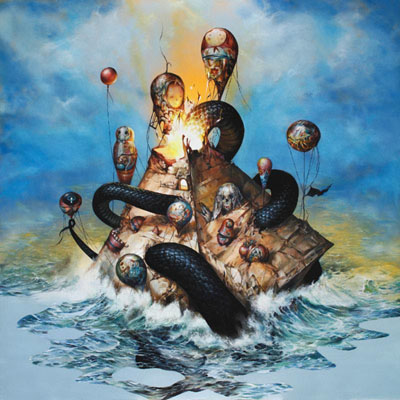 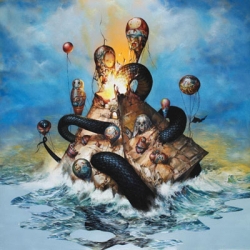 Circa Survive has always proven to be an extremely exciting, fervent, and skilled group of musicians with a remarkable vocalist at the forefront, and ‘Descensus’ maintains that chemistry very well.

Celebrating its tenth anniversary this year, Philadelphian post-hardcore/progressive rock quintet Circa Survive has never failed to satisfy its fans. Like stylistic siblings Closure in Moscow and At the Drive-In (who disbanded in 2001 and became two other groups, Sparta and The Mars Volta), Circa Survive’s frenzied percussion, sharp guitar riffs, and high pitched vocals are as arresting as they are distinctive. On their fifth LP, Descensus, the fivesome continues to perfect its adored formula, albeit it in a slightly less chaotic way overall. In other words, although Descensus sounds a lot like the band’s previous work, it’s still a gripping, catchy, and passionate auditory voyage.

In an August 2014 interview with Alternative Press, vocalist Anthony Green (whose other project, The Sound of Animals Fighting, is also well-known), described the album as “. . . the most aggressive Circa record we’ve ever made. It’s the first record of ours I’ve been able to listen to front to back without having that song that I’m like, 'Yeah, I could’ve done better here.' Every song has this moment in it that makes me feel ridiculous . . . I feel like we did better than we did before.” In addition, he says that less preparation went into making this one; instead, the band would write and record as they went along in the studio. All in all, the album feels faintly calmer and more melodic than its predecessor, 2012’s Violent Waves, while maintaining Circa Survive’s signature spastic outbursts throughout.

“Schema” hits the ground running with an explosion of soaring vocals, aggressive riffs, and thunderous percussion. Green delivers his words with his token tone and urgency, which rests atop the instrumentation perfectly. Dynamically, it’s your standard Circa Survive track, so the quiet moments are sparse yet impactful, making the track an emotional and sonic rollercoaster. It bleeds into “Child of the Desert,” which is easily more heartfelt and melodically engaging. Bassist Nick Beard displays his skill at holding order with subtle, hypnotic repetition, and there’s a strong sense of pattern and organization all over. Lyrically, the track is very imaginative and poetic too.

Further on, “Only the Sun” utilizes overlapping vocals and guitar arpeggios to create an unparalleled landscape of ever-changing devastation, while “Nesting Dolls,” with its softer approach, moodier vibe, and restraining yet purposeful singing, is a beautifully atmospheric and fetching ballad. Ingeniously, it builds to a wonderfully chaotic crescendo, incorporating many sound effects and characters to achieve its divine amalgam.

Likewise, “Phantom” flows like caramel, allowing its vocals and light arrangement to blend seamlessly. It’s surely among the smoothest, most spacey and sentimental tracks Circa Survive has ever done. Lastly, the title track, which is also the longest inclusion, closes the full-length with domineering riffs and captivating layers, including more vocal counterpoints that showcase Green’s range. It’s an exceptional way to go out.

Aside from its slightly stronger emphasis on tranquil deviations, Descensus doesn’t really shake up the Circa Survive formula, which is both a blessing and a curse. On the one hand, they stick to what they do best, which is exactly what fans crave so much; however, the record doesn’t do much to separate itself from its forerunners, so anyone looking for a bold new direction may be disappointed. Nevertheless, Circa Survive has always proven to be an extremely exciting, fervent, and skilled group of musicians with a remarkable vocalist at the forefront, and Descensus maintains that chemistry very well.