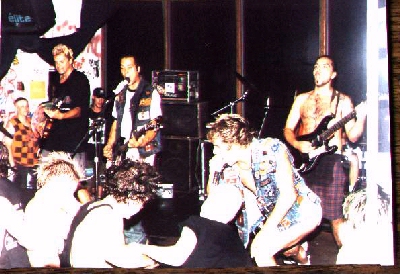 Just the line-up itself promised to whet the appetite for rockin' punk rock. All the way from Canada the infamous band, the Dayglo Abortions were playing a show in Los Angeles for the first time in many a year. From the SGV local scene of long ago were the lost-then-found hard core punks, Decry. And then from Washington, Portrait of Poverty and from Simi Valley, CA, RF7. And last but not least were local icons Staring Problem and Media Blitz. And lest I forget, there was a surprise showing by non other than Dr. Know.

Staring Problem kicked off the set with a snotty volley of hardcore punk sounds with lead singer Andrew giving the show the official blessing needed to get it going. Next were my favs for the night, Media Blitz. Led by the unstoppable "Beast" (I truly and devotedly love her), they cranked out a belt of sonic sonnets to make any punk rocker drool and wish he/she were in a band right then and there. People, go out and check these cretins out--they definitely rock, with a sound and energy level on par with any band I've seen in a long while. Beast, I love you... Next were Portrait of Poverty. They have a metal edge reminiscent of the late-80's punk bands and a lead guitar/singer who definitely knows how to wield a guitar and wield it right. RF7 hit the stage next with a hardcore set and a cool singer, but my memory starts to fade at this point with all the suds I'd been consuming, but I think they rocked. Dr. Know then played and they played a pretty standard fair of songs with my memory further fading into oblivion. Decry played and rocked but still the brain cells fizzled and no new connections could be made. I think at this point the couch in the back started to look very appealing and comforting: I laid down and rested. No sooner had I laid down than the band we all had been waiting for jumped on stage. With a shittier sound than all the bands put together, they managed to get their point across emphatically. It didn't matter that they had never heard of a sound man, these Canadians put forth huge reserves of Northern energy and got the all ready frenzied crowd into a frothing lather. Their singer simply had made a pact with the devil to retain his teenage energy level all of his life and he did exercise his physical prowess in zany, contorted convolutions. They drove through the short set and crappy sound to win the hearts of the audience. Applause. At this point everything fades into black. Credits roll.

Too Fat For Love

The Shots from the Kalico Rose