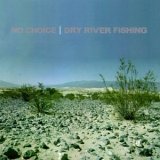 Album Review
No Choice
Label: No Idea Records
Reviewed by Janelle
From the get-go, all I could think of was Face to Face (well, with the exclusion of the brief George W. Bush soundbite that kicks off the record...) - what with the infectious pop-punk and vocals that sound eerily like those of F2F's Trevor Keith's, especially on the opener "If Logic's First (We're Coming Second)" and later, the penultimate track, "Grip". But no, this isn't a sub-par imitation of that great band, but rather a fine Welsh four-piece who first got together way back in '81 and play punk rock that, yes, bears some similarities to F2F...but not always (we'll get to that later...). Oh yeah, and No Choice are DECIDELY more political than F2F, as they include snippets of Bush and Tony Blair on a couple of tracks and some extremely astute socio-political commentary throughout.

The paramount tracks have to be the Bad Religion-esque, speedy and dark "Book Cooking"; the following song "Dry River Fishing", which also is rather dark and full of an innate urgency; the contrasting "Prey", which is melancholic and moving, featuring echo-y guitars and light percussion adding to its ghostly feel (perfect tones for the subject matter with which it deals: the scandalous and horrible, all-too-prevalent sins of the clergy; "Come My Hour", another melancholy tune that also deals with problems of humanity - this time the feelings an abused child experiences and then moving on; and the finale, the surprising "Wonderland" that, despite its ska-tinged guitars and overall dance-ability, an aspect that could prove detrimental, as normally ska equates happiness and light-hearted fare and thus could detract from the serious message of the lyrics, this is not the case. Rather, because No Choice manage to instill some darkness and complexity into the composition, the subject matter is not undermined. The song ends on a memorable note with some cool, mellow reggae bass and echo-ed vocals reminiscent of The Clash.

On the whole, 'Dry River Fishing' is an album worthy of praise, as No Choice meld intelligent lyrics with songs of many tones and styles, while never straying far from their punk roots.