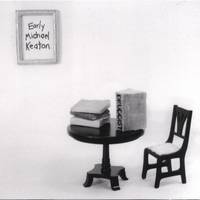 Album Review
Druggist
Reviewed by smalltownredemption
"You could totally hear them on The OC or something like that." Exclaims my wife from behind me as I listen through Druggist's first full-length venture, Early Michael Keaton.

How do you take a comment like that? With an immediate gag reaction (Even though I was a closeted fan of the show till it went all 'Days' on me) or a quizzical head turn and a more definite listen to realize "I see what you mean."

With the opener of Early Michael Keaton, "Restful Days" you immediately get the sense that this San Antonio quartet know how to write a song. One that sets off feelings of a road trip with friends in that under developed, grainy, stylized, film way. This feeling is only solidified by the albums closer, "One Dumb Love" which is quite simply anthemic by nature without the band ever coming across as... well anthemic, in the usual over produced, overly "I'm making an anthem" way.

But Druggist are in no way one trick ponies, capable, at best, of creating a summer hit. This is a band of unique depth that Early Michael Keaton showcases throughout. I hate to make the comparisons but I'll do it anyway, the slumbering beast that this album represents gives me the impression of something more like The Beatles and Beach Boys earlier efforts, hinting at what is going on in this bands head for the future. Songs that show off this sensibility include "Eponymous Epitaph" and "Just Look Inside" where vocal and guitar duties are handed over to the bands drummer, Justin Drummond.

The whole album is a respite from the over genre'lising of our medium made oh so more apparent by the bands fresh outlook on what an album should be, and the unique and sometimes haunting vocals of Lead Singer, Blake Cormier. To me Druggist pose a question with Early Michael Keaton. "Are we to be defined by a generation or a we to define it ourselves?"