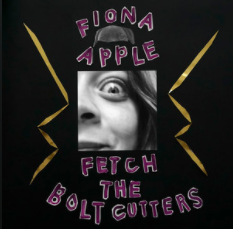 Fiona Apple’s fifth studio album soars with transcendent, outside-of-the-box lyrics and musicianship, though it’s occasionally bogged down by its own density.

The first time I listened to Fetch the Bolt Cutters, I have to admit that much of the lyrical content went over my head. Apple crams so much into this dense, white-hot aural autobiography that so many of those delicious morsels of lyricism - the scathing indictments of men, privilege, childhood bullies, and the self-defeating machinations of her own mind - were lost on me, given that Apple spits so many of her words like machine gun fire. So, at first glance, I wasn't blown away, and I was close to setting up camp with everyone who insisted the album was gratingly overrated, pretentiously obscure, and inaccessible. But after re-listening to Bolt Cutters with the lyrics on hand, I realized what a masterpiece this album is. It's not perfect, but many masterpieces aren't (I tend to skip over a few songs on Sgt. Peppers'). It's still an astonishing feat of musicianship and a refreshingly original take on the tired "confessional" album, while also embodying the DIY ethos and showing just how much can be achieved through home recording (the entire album was recorded in Apple's Venice Beach home). It's something of a sister album to 2012's The Idler Wheel, as far as tonal and compositional qualities are concerned, but it's more ambitious, more personal, and more direct, while also lacking some of the previous album's pop-like qualities. While there are some refrains one can sing along to, this album doesn't quite seem made for that. Fetch the Bolt Cutters is an experience, first and foremost, demanding you shut up and listen. It has some solipsistic qualities, as anything intensely personal has the potential to bear, but Apple's genius as a songwriter, musician, and producer makes it so that any solipsism is forgiveable, even integral, to the effectiveness of the album.

With the first track, "I Want You to Love Me," Apple sets the tone of the album with an encapsulation of her worldview, a seemingly existentialist one: that nothing in this corporeal realm truly matters, that everything is fleeting and that when we die, our particles will "disband and disperse" and we'll go "back to the pulse;" but that while she's here on this planet, in her fleeting physical form, she'll embrace her animalistic programming: "And while I'm in this body/I want somebody to want/And I want what I want/And I want you to love me." This song aches with tension and it's rife with duality, both of the intellectual and musical sort. It's at once cerebral and visceral; Apple seems to know where she stands on this plane of existence, and while she's here, she knows what she wants: not just to be loved, but to be wanted; for someone to "bang it, bite it, bruise it." As she barks these phrases, like lusty demands, the kick drum pounds in sync, like a sexual rhythm.

Another highlight on this album is the second track, "Shameika." It's a staggering feat that reads like both a vignette and a racing internal monologue set to music. The clarity and wit with which Apple evokes her childhood days as a misunderstood outcast makes clear how singularly equipped she is at tackling a form of recall that less gifted lyricists would surely fumble. As frenetic piano arpeggios needle on in the background, the aural equivalent of anxiety and despondency, the listener is right there with her as she walks to school, "grinding her teeth to a rhythm invisible," crushing dead leaves "like they had fallen from trees just for me, just to be crash symbols." Cue the crash symbols, of course. It's not clear just who the titular character is supposed to be, but the refrain to which Apple returns, after tense onslaughts of verses describing the sullen agony of her alienation, is "Shameika said I had potential." Apple makes clear that this person wasn't a friend and "wasn't gentle," but was someone who believed in her nonetheless. It's her own unique snapshot of the kind of seemingly innocuous memories that stay with us and inform us, and the people who stay in our psyches long after they've departed from our lives.

Occasionally, some songs get bogged down by lyrics that are too obscure to derive much meaning from. On "Heavy Balloon," Apple snarls in a throaty, Cobain-like growl: "I spread like strawberries/I climb like peas and beans." Combined with the aggressive delivery of these lines, sung as if they're pregnant with meaning, the song rings somewhat hollow.

Several songs on this album seemed to be aimed at men: predatory, fraudulent, egocentric, and sometimes all of the above. In "Relay," Apple slings a scathing indictment that could be aimed at one man, or it could be aimed at everyone who's guilty of posturing on social media, in one of the most mic-drop worthy moments on the album: "I resent you for presenting your life like a fucking propaganda brochure." In "For Her," with rapid-fire, one-woman barbershop quartet harmonies, she targets the type of narcissism and artifice that men in positions of power exhibit: “Sniff white off a starlet's breast/Treating his wife like less than a guest/Getting his girl to clean up his mess.” In the same song, she does a sudden about-face to an entirely different musical structure, an ethereal, dirge-like field holler in which she proclaims: "You raped me in the same bed your daughter was born in." She's not letting anyone off easy; as she declares in one song, "I will not shut up." Many people may interpret this sentiment as a profoundly feminist statement, written for all who have experienced oppression and marginalization, but I don't get the impression that Apple wrote this album for anyone but herself. And that may be as feminist as it gets. 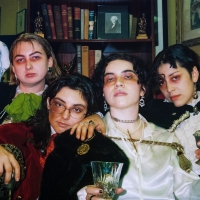