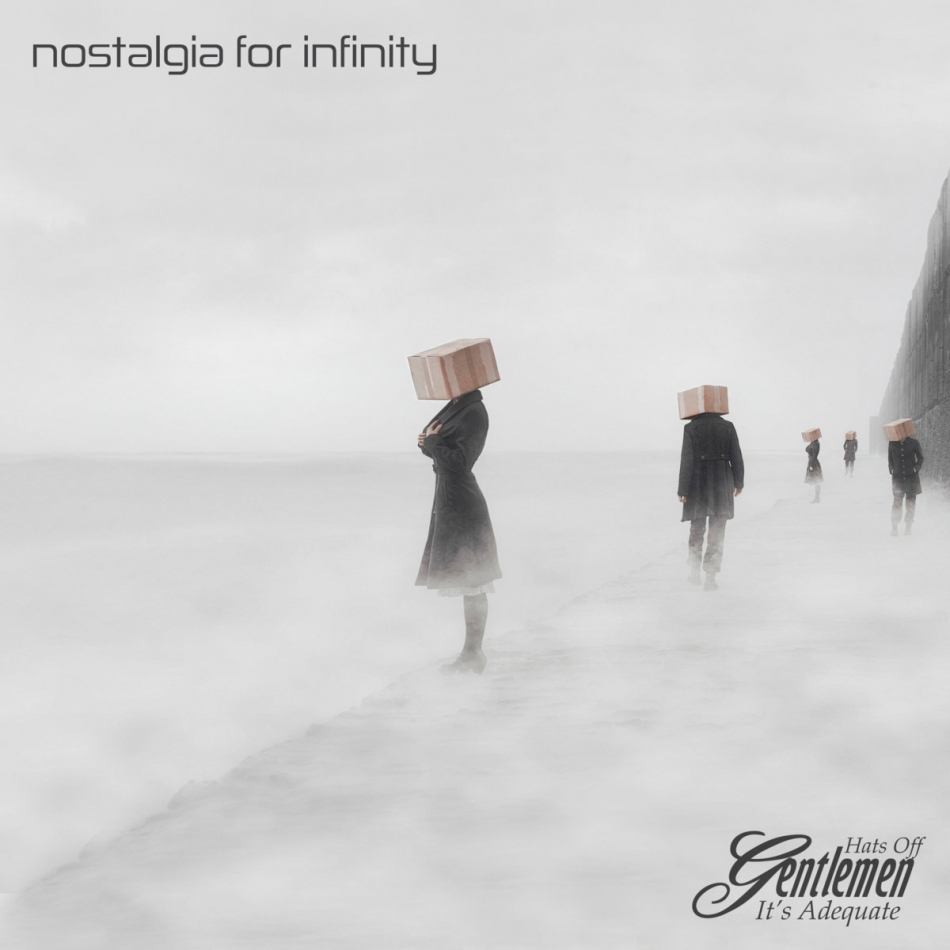 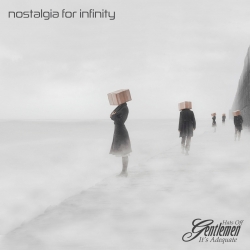 Nostalgia for Infinity is an exquisite mix of appealing songwriting, intricate musicianship, and unconventional techniques that channels multiple genres and eras into a deeply unified journey.

English duo Hats Off Gentlemen It's Adequate certainly chose a moniker worthy of curiosity and remembrance; fortunately, their music proves to be just as intriguing and enduring. Centered around multiinstrumentalists and vocalists Malcolm Galloway and Mark Gatland—with support from vocalist/flutist Kathryn Thomas—the group aptly classifies itself as a “genre-defying band combining prog/alt-rock and electronica, with elements of minimalism, funk, classical, acoustic, and metal.” Indeed, there’s virtually as much vintage progressive rock in their music as there is late 70s/early 80s glam rock and new wave, leading to irresistibly wide-ranging and pristine compositions. Their latest collection, the semi-oxymoronic Nostalgia for Infinity, does an excellent job showcasing that cohesive fluidity. It frequently juxtaposes wonderful accessibility and eclectic abstractions, resulting in a fascinating journey that requires repeated visits to fully appreciate.

Nostalgia for Infinity follows 2018’s Out of Mind LP, and it contains two out of three pieces from 2019’s Ark EP. According to the band, it centers on “the frailty of civilisation, from a variety of perspectives, including seven tracks inspired by the science fiction novels of author and former astrophysicist Alastair Reynolds.” Elsewhere, there are pieces “relating to nanotechnology, the Second World War, and environmental destruction.” Clearly, there’s a lot of historical, philosophical. and sci-fi weight to the lyrical content, and luckily, its melodies and arrangements make you want to dig into each and every sentiment.

The first five tracks are considered separate statements, yet they go together quite well. Specifically, opener “Century Rain” is raw and apocalyptic yet also wistful and ornate, combining the airy deliveries of Tim Bowness with a strong sense of galactic warmth that’s perhaps best considered as the sonic offspring of Pink Floyd and Jethro Tull. From there, “Twin Earth” is sparser and more meditative; “Ark” is like a modern take on Mike Oldfield’s classic introductory instrumentals; “Nanobotoma” is more conventionally eloquent but rebellious; and “Chasing Neon” conjures the electronic frenzy of Ayreon and The Pineapple Thief. Of course, these comparisons aren’t meant to signal unoriginality; rather, they’re meant to demonstrate how speckled yet integrated the record is.

That harmony is only accentuated once the “Redemption Ark Suite”—comprising tracks six through ten—begins. The relatively industrial and shimmering “Glitterband” is a strong start for the mini sequence (especially since its built upon beautifully hypnotic piano motifs), whereas “Conjoiners” incorporates Genesis-esque keyboard work into a subtly atmospheric environment. Next, “Scorpio” borders on jazz fusion trickiness and experimentation, contrasting well with the chillingly pastoral sound collage of the subsequent “Inhibitors”. It’s reminiscent of early Porcupine Tree in the best ways, and also serves as a lovely prelude to the full-bodied and serene closing title track. It works almost like a culmination of what came before it, leaving the cosmically earthy “Voyager” and the feistily melodic “Sixth Extinction” as resonant endcaps.

Nostalgia for Infinity is an exquisite mix of appealing songwriting, intricate musicianship, and unconventional techniques that channels multiple genres and eras into a deeply unified journey. By evoking so many influences and styles at once, Hats Off Gentlemen It's Adequate comes off as commendably original and ambitious. In a world in which so much music is exhaustively predictable and safe, it’s nice to find an LP that’s so surprising and absorbing at once. If you aren’t already tipping your cap to the London duo, Nostalgia for Infinity is a great reason to do so.