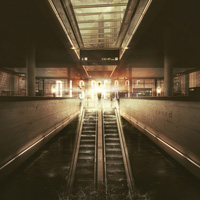 Forward succeeds most because it circumvents relying too much on genre tropes by incorporating other styles (most notably, electronica) throughout.

Like cultural siblings Riverside, Pinkroom, SBB, and Hipgnosis, DispersE currently reigns as one of the top Polish progressive rock/metal outfits. Comprised of Rafal Biernacki (vocals/keyboards), Jakub Zytecki (guitars), Bartosz Wilk (bass), and Mike Malyan (drums), the quartet began in 2007 and cites Devin Townsend, Cynic, and Planet X as influencing the inclusion of “fusion, jazz, metal, experimental, [and] djent” into their formula. Having released two exceptional efforts already—2010’s Journey Through the Hidden Gardens and 2013’s Living Mirrors—they set a high bar for their third outing, Forward, to overcome. Fortunately, it does without much trouble, offering a refreshingly melodic and vibrant collection that abides by genre principles while also injecting enough cohesion and outside styles to “radiate vivid hues of sound like a prism.” To be fair, there could be more variety here—a lot of it sounds very similar—but that’s also what makes it feel like a continuous journey.

The band’s specialties declare themselves from the start, as opener “Stay’ stands out with its emotional core. Sure, the standard fiery guitar licks, gravely singing, and explosive percussion are there, but so are delicate components like children’s chants and an overarching spacey mood. Also, Biernacki’s lyrics are often more poetic and inspirational than you might expect, with lines like “there's so much beauty in this world / sometimes I feel like my heart and yours are part of it all” adding substantial pathos to the virtuosic arrangement. The following track, “Surrender,” maintains the balance with drastic dynamic shifts that find the composition flowing constantly between in-your-face hostility and soft introspection. There’s also a gradual sense of symphonic depth, too, with robust piano passages and electronic voices filling in the cracks.

“Bubbles” is more frank and less fanciful, so it would do well as an album single, while “Tomorrow” utilizes layered vocals and machinelike beats, in conjunction with crunchy riffs and frantic rhythmic swings, to appear both dreamy and nightmarish. Like all of Forward, there’s an underlined sense of urgent destiny here as well that makes everything feel purposeful and impactful. The electronic touches are made even more prominent on “Tether”; in fact, it’s as serious and dystopic as it is jovial and fun, which highlights what makes DispersE separate itself from the pack. Afterward, “Sleeping Ivy” is a bittersweet ballad that carries the kind of catchy ruggedness that recalls the work of John Mitchell (both It Bites and Lonely Robot). It also houses some of the most eclectic and alluring production on the album, with plenty of intriguing tones moving around as it progresses, making it feel like a constant evolution.

The longest track in the set, “Does It Matter How Far?” is a mostly laidback epic that features interesting interplay between Zytecki and Wilk throughout, plus a perfected blend of techno and progressive metal as it segues between its movements. The title track appears next and acts as a brief instrumental transition packed with more childlike voices and motivational outbursts. From there, “Neon” introduces some hard rock/blues riffs into its cosmic recipe, while “Gabriel” is actually kind of funky and breezy, evoking the smooth styles of, say, Paul Gilbert and Joe Satriani. Forward finishes with “Kites,” whose sparse opening—comprised of only light syncopation and effects around Biernacki‘s gentle laments—soon adds backing vocals, clean guitar licks, and even hand claps that enhance the sense of grandiose finality.

Forward succeeds most because it circumvents relying too much on genre tropes by incorporating other styles (most notably, electronica) throughout. In this way, it’s as futuristic and atmospheric as it is destructive and technical. That said, it can get a bit repetitive and redundant as it goes since, despite techniques here and there, these songs don’t stand out from each other significantly enough. All in all, though, DispersE proves to be a fairly characteristic band amongst its peers because of its continuity and willingness to embrace outside genres. As a result, Forward is a moving and enticing ride.