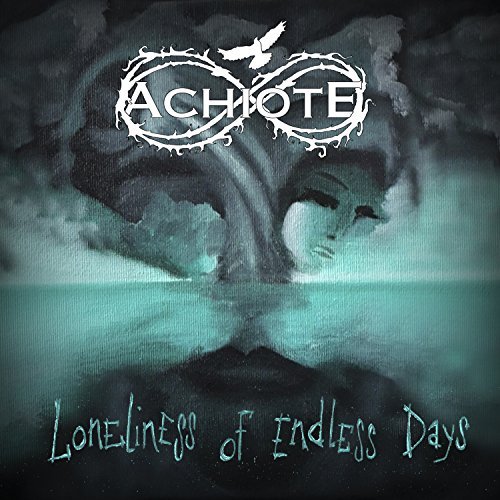 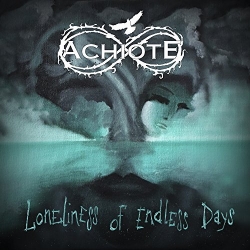 Despite its occasionally overt likenesses to other artists, Achiote establishes enough of its own identity here to make Loneliness of Endless Days stand out a bit.

Defining itself as a “metal band combining melodic heav[iness] and soulful ‘90s rock spiced with northern romanticism,” Finnish quintet Achiote certainly knows how to combine beauty and bleakness. Comprised of Janne Salminiemi (vocals/guitar), Timo Toikka (guitar), Jussi Vuola – (drums/vocals), Tuomas Riihimäki (organs/synthesizers), and Teemu Jortikka (bass), the group’s debut LP, 2014’s Deimos, was very well received, and its recently released follow-up, Loneliness of Endless Days, should be, too. As its title suggests, the collection is powerful, dense, and chilling, with enough fetching moments—both instrumentally and vocally—to make it a heartfelt and compelling, if not entirely fresh or distinguishing, listen.

The album serves as “a painful work of grief” that reflects “sadness and leaving things behind.” More specifically, it’s influenced by “divorces and drifting apart,” as well as former bassist/vocalist Anu’s severe illness related to household mold (which forced her to leave Achiote). Luckily, Loneliness of Endless Days fulfills its intentions as an “emotionally strong” and cathartic record that allows the group to “say [their] farewells to what [they] so deeply loved.” While it never strays too far from the tonal architecture it establishes early on, it’s a strong template to follow, so the album is still consistently intense and moving.

“Alpha Nexus” is an atmospheric and brief instrumental introduction. At first, it’s built around mournful guitar arpeggios and skittish percussion, yet it soon evolves into a reflective passage whose chord changes and central guitar lines quickly evoke Metallica’s lovely “Nothing Else Matters.” Behind it, soft syncopation and piano notes add more panache, making it even more poignant. It moves into “Blinding Lights” with a burst of tension, as a synth and guitar riffs clash before dying down so Salminiemi’s gruff singing can reign. It’s quite interesting how the austere verses juxtapose the relatively poppy choruses, which are accentuated with high backing vocals and enhanced musical intricacy to add more character. Together, these songs pack quite a punch.

Following a similar sense of polarity, “Desert Sun” walks the line between death metal brutality and arid grooviness that progressive/sludge metal bands like Mastodon have mastered. Of course, Salminiemi’s accent makes the piece more idiosyncratic, as do Riihimäki’s keyboard flair-ups, and there’s an impressive sense of skill in how fast they play during the most frantic moments. Afterward, the album’s lead single, “It’s a Trap,” hypnotizes you with a thick main riff that keeps giving way to wonderfully spacey and emotive moments before pulling you back in just as you’ve been soothed. Granted, this type of structure has been done before, but it’s almost always effective, so you can’t blame Achiote for playing it a bit safe. Interestingly, Salminiemi really embodies the phrasing and passion of Serj Tankian here, too, so “It’s a Trap” almost sounds like a lost System of a Down gem.

The title track is gloomy yet delicate at its core, like a late ‘90s Anathema cut, with recurring piano chord progression adding to the gothic ambiance. Halfway through, a complex breakdown gives way to haunting falsetto chants and a piercing guitar solo, as well as some mesmerizing synth patterns, cementing it as a highlight of the entire collection. There’s even more forceful elegance on “Ghost Under the Sun,” while “Something Isn’t Right” feels like a mixture of ELP and downtrodden grunge. To be honest, both “Seduction” and “Ocean Blue” are kind of by-the-numbers (even though each still has some interesting elements), while closer “Whisper to a Deaf” is a fittingly concentrated beast with an intriguing contrast between folksy harmonies and guttural laments, both of which pepper some of the most eccentric and striving moments on the record. It’s a very satisfying way to end.

Despite its occasionally overt likenesses to other artists, Achiote establishes enough of its own identity to make Loneliness of Endless Days stand out a bit. There are enough engaging hooks and vibrant timbres to make much of it appealing, and every moment radiates with how passionate they are about their subject matter and compositions. There could definitely be more variety overall, as the sequence tends to get a bit repetitive after a while, but what’s here should satisfy any fan of progressive metal.