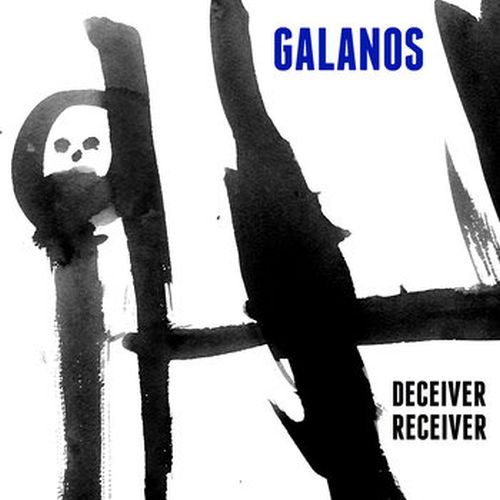 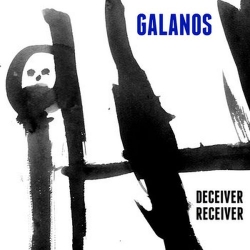 Galanos’ noir sound extends to much of the lyrics and the vocals of guitarist Gregory D. Jaw.  His deeper tones are leavened by the beguiling intonations of Netochka Nezvanova.  The band is rounded out by Joe Pugsley on ominous bass and vocals and John Steele on lively drums.

Deceiver Receiver’s roaming, cinematic compositions range from panoramic Western US views to Eastern cityscape angles.  Nezvanova builds up intrigue with her seductive vocal delivery, but is blunted by Jaw’s more direct vocal tone.  They harmonize together on some songs and croon apart on others, increasing the variety of singing styles on the album.

Album opener “Loneliest Of Men” growls with menacing bass and kicks with a sharp drum beat.  Jaw and Nezanova punch through with their twinned staccato vocals as the rock guitars whip up into an intense blaze.

Nezanova slinks through the haunting “Padre Song”, both pensive and searching amid the chiming reverb of a lighter surf guitar line and subdued percussion and drums.  She exclaims with a regretful sigh, “I grow so tired of these dreams… / I hear my father calling out to me / Oh, father you are beyond me.”

“Flashbomb” is a noisy post-punk dredge with Jaw’s sing-shouting, forceful vocals slicing through the needling and buzzing guitars, running bass line, and driving drum beat.  He emphatically howls, “…a flashbomb in my timeline / “You know I’m the outside of these things / in present time…”

Jaw and Nezanova get sultry on “Mariana Trench”, with Nezanova’s velvety vocals gliding on top of phrases like “life is fleeting”, while a subtle Jaw whispers his vocals out like smoke.  The drum beat struts by in a tantalizing atmosphere of sparkling guitar reverb, low-burning bass, and scintillating cymbals hits.

Indie rocker “Stunner” sounds both British and American, propelled by kinetic drum hits, cymbals smash, and shining, wiry guitar lines (the British aspect) that morph into a Western US cantering pace.  Nezanova, with her vocals sometimes doubled, is shadowed by Jaw, as she delicately intones, “You’re the one who dragged me into the fire.”

“Dead Leaves” is alive with vibrant reverb guitar lines that turn quickly with a jagged edge, a pronounced drum thump, and Jaw singing ominously of, “details of a wild dream.”  He’s backed by a sweet Nezanova while bemoaning the fact that, “I cannot find her.”

Jaw gets even more foreboding on “Feel Good”, a tense spoken word piece with a deliberately measured tempo and spare, echoed guitar lines and percussion.  He unravels a twisted mystery, murmuring about someone who “follows me out there,” while a hollow wind blows through the end of the tune.