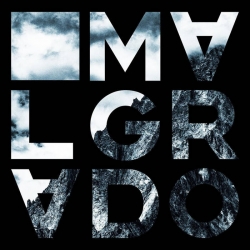 MALGRADO, a band with hardcore/punk/screamo influences from Italy with members of Council Of Rats, Baratro, La Crisi.

Malgrado from Milan, Italy are an intense listen. Their brand of short burts of chaotic screamy hardcore for listeners who don't understand Italian makes the music even more abstract. As the lyrics become almost another instrument in syncopation with loud abrasive drums and guitars. At moments as songs jump within multiple heavy genre's like grindcore and punk the tracks almost take on a vibe like Dillinger Escape Plan. In some ways the vocalist has elements of Mike Patton or Derek from Defeater but when you are listening to something not in your own language I think those kinds of comparisons are harder to make. On other tracks like "Le Notti Della Leggenda" , which translates to "the nights of legend", the band is all out thrashy punk like D.R.I. or Circle Jerks. I think the appeal on a record like this is each short song is like a sudden explosion of energy with enough variety to keep it intersting like on "Senza Un Braccio" how the track is more of a halftime sludgey dark metal song and gives the listener a break from the more uptempo barage of songs earlier on the release.
The full album Malgrado by Malgrado is already available at the bands bandcamp page and it promises not to disappoint if you are into sludgey, screamy, hardcore tinged with punk and metal. Even if you don't know a word of Italian I think what Alfredo, Federico, Gabriele, Marco have created here is enjoyable.