Headed for a Breakdown 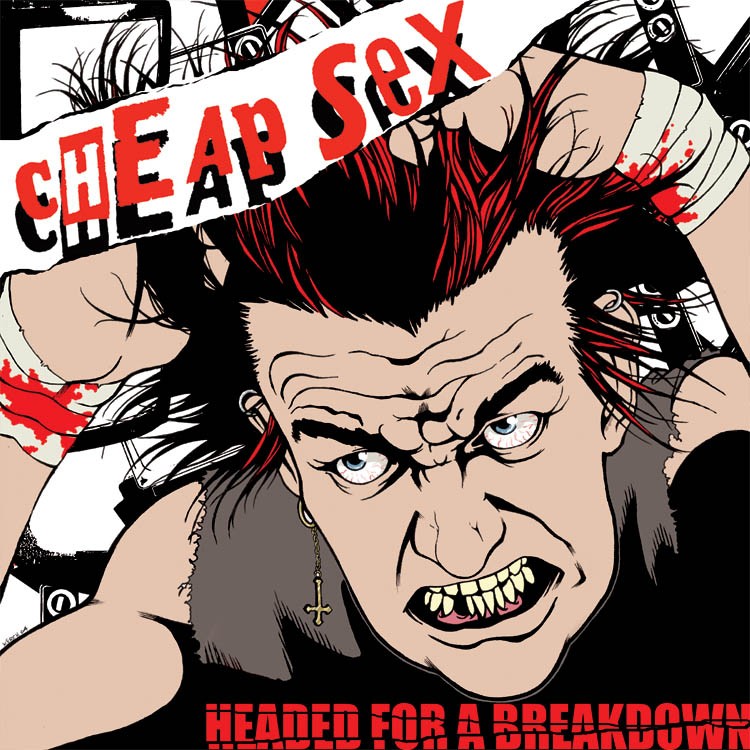 Album Review
Cheap Sex
Label: Punkcore Records
Reviewed by Janelle
As was the case with their full-length debut 'Launch Off to War', Cheap Sex can do no wrong when they go for a heavy, dark, and bludgeoning sound as best exemplified on the fast and furious "Lucky to Be Alive", "Headed for a Breakdown", "Water Runs Dry", and "Worst Nightmare", to name a few. These songs are unbeatable, to be sure. Ooh and what of "Raped by the FCC" with its great dark and foreboding little intro and ensuing blast of hardcore punk? Awesome stuff. As most of Cheap Sex's material deals with society's ills, this song is no different, as, if it's not apparent by the title, the lyrics focus on censorship in the media, ending with some sound advice: "If you're offended, TURN IT OFF!"

The only questionable move on 'Headed for a Breakdown' is Cheap Sex's foray into melody with the less than favorable "Desperation". Similarly, this was true of the band's memorable debut 'Launch Off to War' on songs like the more poppy "Take a Chance". Anyway, though "Desperation" features some great lyrics and good subject matter about how the youth ﾖ OUR generation ﾖ aren't heard ("The youth is the pawn, and the leaders the king/Try to speak out but nobody wins"), the rather "happy" sound isn't where this band ﾖ which I always equate with heavy and oftentimes brilliantly brutal hardcore punk a la the masters, Discharge and The Varukers ﾖ excel. Moreover, Mike Virus' (yes, original singer of The Virus) abrasive vocals just do not seem to be suited as much for melody, sounding vastly more well-fitted with music that's feverishly urgent, hectic, and just plain heavier, as on the exceptional, almost claustrophobic "Worst Nightmare". One track where Cheap Sex strays noticeably from the norm (and it works), however, is the somewhat toned-down, more rock 'n' roll "Walking Disease".

Essentially, similar to their previous LP, Cheap Sex hit the mark by keeping things for the most part hardcore, only occassionally dabbling in some different sides, which shows their versatility. I bet many people like the more melodic tunes, but they just seem so much more vital when playing throttling hardcore punk. All in all, undoubtedly a great sophomore effort.