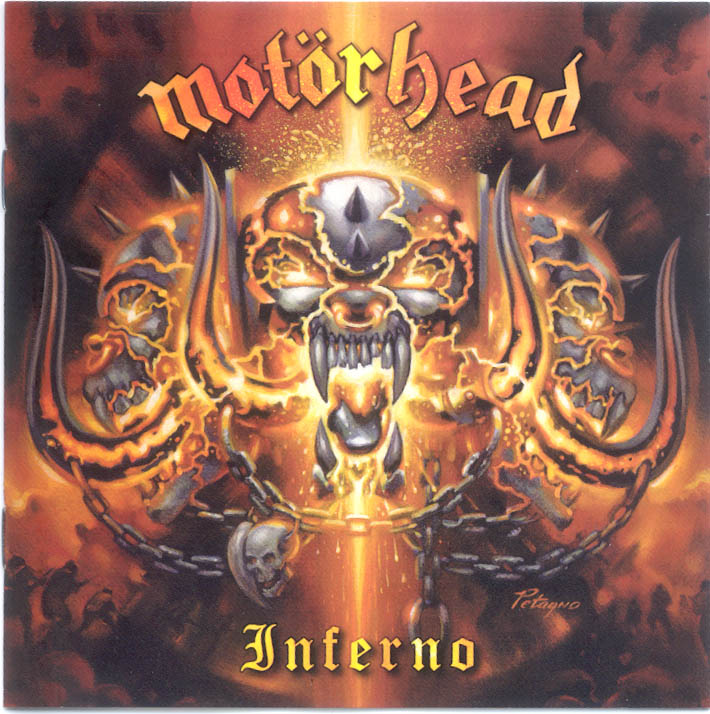 Album Review
Motorhead
Label: Sanctuary Records Group
Reviewed by Janelle
The inimitable Motorhead, after 2002's 'Hammered', are back with 'Inferno', an album comprised of 12 incendiary tracks. Forming in 1975 and releasing their debut self-titled album in 1977 in England, Motorhead are the originators of speed/thrash metal, while fusing punk, heavy metal, and good old rock 'n' roll into their own unique blend that still stands on its own to this day.

Understandably and expectedly, Motorhead don't change up their style or sound much on 'Inferno' (their, what, thousandth release?). Hell, if it ain't broke don't fix it, right? And it ain't been broke for nearly 30 years, so, well, you get the picture. Motorhead ﾖ the indefatigable genius and original founding member Lemmy Kilmister (vocals/bass) along with guitarist Philip Campbell and drummer Mikkey Dee ﾖ are so bad-ass, it's great. Though the entire record is searingly aggressive, relentless, and unyielding, there are some songs that manage to stand out more than others like the immaculate, ridiculously heavy "In the Name of Tragedy" and "In the Black"; the tough rockers "In the Year of the Wolf" and "Suicide", which though a little more toned down than most of the other fare, is still hard enough to please; and the sick opener "Terminal Show", which along with "Down on Me", features supplementary axe-work from one Steve Vai. Placed at the beginning of the album, "Terminal Show" really gives the listener a taste of what he/she is in for (as if one would have any doubt!). We get some bluesy numbers as well, including "Keys to the Kingdom" and the acoustic "Whorehouse Blues" ﾖ a nice, sincere closer, featuring Lemmy on harmonica. A fun little tidbit - on the blistering "Killers", Lemmy name-checks "Ace of Spades" in the lyrics. In essence, you LOVE Motorhead, you'll LOVE Inferno. Not familiar with this punk/metal staple but are a fan of all-thing heavy? Check this record out ﾖ and the rest of their catalogue. Truly, you can't go wrong.

Headed for a Breakdown