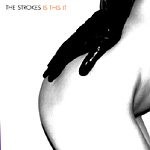 Album Review
Strokes, The
Label: RCA Records
Reviewed by Stephen Rafael
I suppose it is alright to sound just like Lou Reed if you come from New York City. And not only are singer-songwriter Julian Casablancas and his band, the Strokes, from NYC, but they are also signed to the same record label as Reed -- RCA. (So, I guess it is safe to assume that the youthful members of the Strokes, who all fall into the 20 to 23 year-old age range, will not be issued lawsuits from Reed's lawyers anytime soon.) However, even though Casablancas may sing exactly like Reed, he and his fellow Strokes suffer from an entirely different set of vices than those shared by Reed and his legendary band, the Velvet Underground.

While Reed and VU sonically and lyrically immortalized life-threatening substances like smack and speed, Casablancas and company are instead obsessed with getting in-and-out of the apartments (and beds) of sexy, upscale, 20-something NYC girls. "Is this it?/ I'm just way too tired," a weary yet victorious Casablancas warbles on the album's title track. And with the young Strokes' fashionable good looks and prep-school backgrounds, one figures that Casablancas is more concerned about wasting his precious energy than missing out on an all-too-frequent opportunity to roll between the sheets.

Despite the Strokes' too-cool-for-words appearance and attitude, the rest of Is This It is not at all aloof. On songs like the cleverly affable "Someday," Casablancas and his band show genuine and appreciable warmth: "I'm working so I don't have to try so hard/ Tables they turn sometimes/ Oh some day." For, in a perfect world, all kids would happily grow up listening to old copies of Reed's Transformer and Television's Marquee Moon. But, until that day eventually comes around, we fortunately have the Strokes and Is This It.