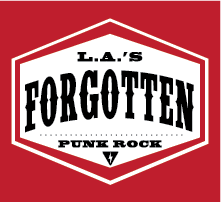 L.A.'s Forgotten is a new punk band with old punks roots, started in September of 2011. The band consists of members Jeff Kaysen on lead vocals, Anthony Canales and Billy Lee on guitar, Trevor Kato on bass, and Rus Moore on drums. With members from previous bands such as No Ones Allie, Resistant Militia, and Y.A.P.O this band has that old punk sound that will really make you want more. This past weekend they played a free show at Brew Rebellion in Yucaipa, California. Listeners could expect loud vocals, fast paced songs, and aimless wandering around by the lead singer. There was a cover song of Black Flags' "Nervous Breakdown", the band also played all of their recent songs which included Draino, Black Dahlia, Money Maker, Smash The Glass, and Forgotten. Their total playing time was only 45 minutes but with every song there was a good enough melody that it was satisfying. L.A's Forgotten can be found on Facebook where you can also download for free all of their recent songs.

Prog metal leader Between the Buried and Me dominated Philly’s TLA on October 19th.