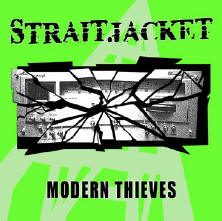 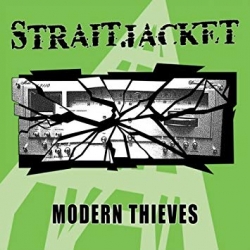 Very seldom can a band successfully combine the nostalgia and influence of the bands they grew up loving and their own definitive sound, but "Modern Thieves" by Straitjacket comes pretty damn close. The 13 song full length TKO Records debut by the Portland, Oregon quartet is reminiscent of the late 70's UK punk scene- singer/guitarist Brian Olson's voice grates across the microphone with the swagger of Joe Strummer and the snotty confidence of Lars Fredrikson. Musically, there's not a lot of new ground covered on "Modern Thieves", but don't let that deter you. Lead guitarist Julian Bijmans' solos are right in place, and bassist Jeff Truhn and drummer Matt Naylor hold the rhythm fort down with the subtlety of a monkey stomp to the curb. Just under a half hour long, "Modern Thieves" is a collection of better than average streetpunk songs-noteworthy in particular are "Don't Know Why" in which Olson laments about complacency and "Tuned Out", a lightning-fast bile spewer about what else-that's right kids, the government! Old-schoolers who were there and want to revisit and next-gen punkers alike will enjoy "Modern Thieves". It has all the ingredients of a good record-sounds good but not slick, eager but not overzealous, and most importantly, no pretentious, punker-than-thou grandstanding can be found here, just honest songwriting.

Straitjacket hit the road in April for a US tour in support of the album.