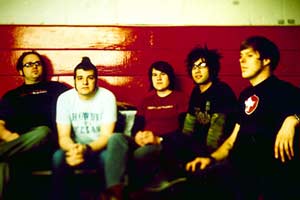 “I’ve got so much to talk about”

This was yet another homecoming show for our Minneapolis homeboys in Motion City Soundtrack. This was not just an ordinary-everyday show, the crowd witnessed a dream-come-true for the band last night. Lead singer Justin Pierre made note of that inbetween songs, more than once, saying "I've wanted to play here since I was 14...and now we're finally here and there's so many of you guys!"
He wasn't exagerating... The house was packed literally from front to back, fans pressing up wanting to be closer to their hometown Heros even forced the baracade up and out of place. Sure made it hard for certain photographers and security guards to do our jobs, - thanks you guys.. But we all stuck it out singing every song Motion City Soundtrack threw our way.
These guys played nearly every song off their latest release "I Am The Movie", the highlights, catchy melodic hits like
"The Future Freaks Me Out", "Capital H" and of course, "Perfect Teeth" definately kept the crowd moving. One of the last songs, "Autographs & Apologies" as Justin says, "a really fuckin sad song" let the emo kids know they're not alone...but who am I kidding, I love that song too!

The guys have been spending a lot of time in California working on their next record, which, by the looks of the kids in that crowd, a lot of people are highly anticipating. Motion City Soundtrack has succeeded in making me very curious to hear the rest of the songs from the in-progress full-length after playing one song they had just finished putting together for us.
-Oh and MCS definately do not fail to represent as keyboardist Jesse Johnson was sportin a tight black "I <3 MPLS" tee last night, making every Minnesota native, girl (or boy) happy - and in some cases...a little turned on? (..sorry guys, haha.) Oh, those teenage hormones... Moving on!

It was just simply amazing to see a show so high energy - just as every fan knows, Motion City Soundtrack never fail us there! Can we say, balancing acts on keyboard-stands? Jumping, flailling about, just fuckin bringin' the house down! Oh yes, and that my friends is what has been bringing fans back time after time,
MCS + MPLS = crazed fans and always a damn good show
Last night's show was the last date on the tour before the holidays...
Headling the legendary venue, First Avenue, in your home state, to a packed and probably sold-out house - not a bad christmas present, not bad at all. And for every fan that made it out that day and waited in the freezing cold Minnesota weather, it was not a lost cause. Witnessing a little bit of history is something every fan would wish for and no one left feeling let down.

MCS are set to head back out on tour early 2005. Make sure you get your chance to see this band play, expect nothing short of an amazing show, musically and especially in terms of stage performance. Motion City Soundtrack definately will not fail you - they're worth every penny you pay to see them play - and then some.

Live at the Deaf Club