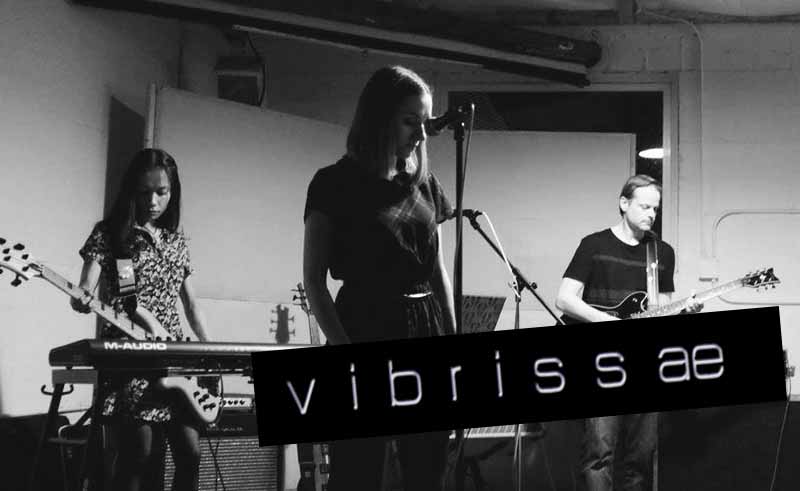 The members of Portland, Oregon’s electronic/shoegaze trio Vibrissae may come from different parts of the world, but they all share of love of specific genres of music which they bring to life on their upcoming debut album, Somewhere Away, that comes out August 19th on the Vipchoyo Sound Factory record label.

Imber Lingard (vocals on Somewhere Away), who is originally from Australia, Emma Bell (various instruments), who was born in Malaysia, and  Americans Aaron Bell (various instruments) and Sandi Leeper (vocals for live performances) blend or move between electronic, rock, synth-pop, and shoegaze styles on Somewhere Away’s captivating assortment of songs.  While Lingard provided vocals on the album, she has since had to leave Vibrissae to take on other responsibilities and Leeper is currently the vocalist for live performances.

Post-punk-leaning lead single “Need” is a striking example of Vibrissae’s musical range because it’s doesn’t sound like any of the other songs off of the band’s debut album.  It commences with a mad scramble of angular guitar lines before tensely relaxing into a deceptive calm.  The guitar frisson re-launches from time to time during the song’s run, adding an electrifying intensity to the chorus sections.  On the verses Lingard sing-talks in a subdued, but longing tone about someone she adores, her words becoming submerged in the murky bass line undertow, sharp jangle of guitars, and measured drum beat.  She bursts out on the chorus with a hypnotizing fervor, exclaiming, “This is what you want / This is what you need.” amid the stirring push of guitar distortion.