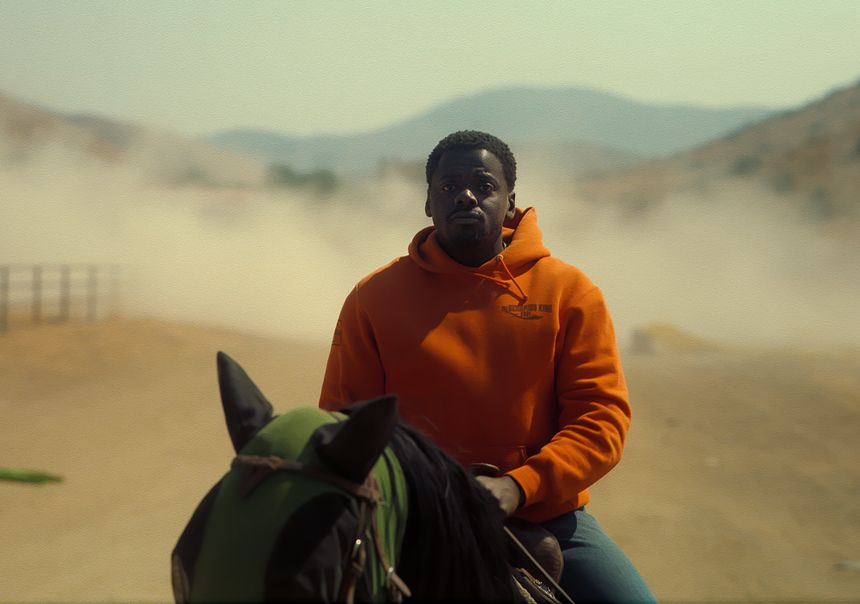 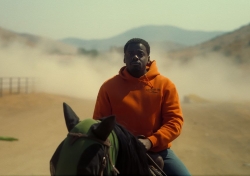 Continuing along in the horror genre but this time planting obvious seeds of sci-fi plus a sincere love letter to the act of filmmaking, director and writer Jordan Peele (of US and GET OUT fame) is back with another ambitious release, NOPE. Pairing once again with Daniel Kaluuya and featuring Keke Palmer, the two play brother and sister OJ and Emerald who have inherited their father’s ranch in California after his death several months back from getting pelted by unidentified objects in the sky. With personalities on the opposite ends of the spectrum, the siblings train horses for film and TV shows to follow in their family’s legacy. Steven Yuen is introduced as 'Jupe', a once young TV actor turned carnival owner in an isolated plot of land near OJ and Emerald’s ranch. Mysterious objects and unmoving clouds once again start to take over the desert skies and Emerald is determined to capture the scene on film, excited by the prospect of gaining a fortune at their discovery. Peele’s NOPE includes a plethora of interesting ideas, yet part-way it becomes evident that the director may have more on his plate than he can chew off.

Separating the film with title cards featuring various names of tangible and intangible horses, Peele makes reference and pays tribute to the first motion picture ever made by Eadweard Muybridge in 1878 who used multiple photos of a horseback rider and a galloping horse. Rather than getting lost in the shadows of more prominent and wealthy filmmakers, the audience is reminded of the skewed nature of history and historical figures that get pushed to the wayside. NOPE’s sound mixing is also especially prominent, with the stomping and neighing of horses and hooves contrasting with the eerie silence of the vast sky. Featuring sound designer Johnnie Burn (of Under the Skin), the utilization of the lack of sound successfully forms a terrifying and enclosing claustrophobia. Fear is conjured from the raw nature of beasts and the unknown which go hand-in-hand in Peele’s delivery of wild animals reacting towards their domesticity and unknown extraterrestrials observed in the clouds.

A general critique I have, moreso in the last decade, is a director’s hunger to seamlessly fit a mass of genres and messages into a single piece of work, usually resulting in haphazard and messy unraveling of a film. Unfortunately Peele falls into this category of having a plethora of interesting ideas, but not knowing how to engagingly convey or how to effectively execute them on screen. Squeezing in notions of capitalism and fame, predators versus prey, the history and sheer love of filmmaking and Hollywood, NOPE loses its momentum once an idea is presented and then discarded before another wild scheme makes an appearance. Without giving away spoilers, the film also turns into a superficial roundabout action piece towards the last half hour, making me wonder whether I was still watching the same movie when I entered the theater. I applaud Peele for an intriguing set of intentions, yet having such a broad scope in his vision rids NOPE of any pulse it may have had, had he toned things down just a notch.