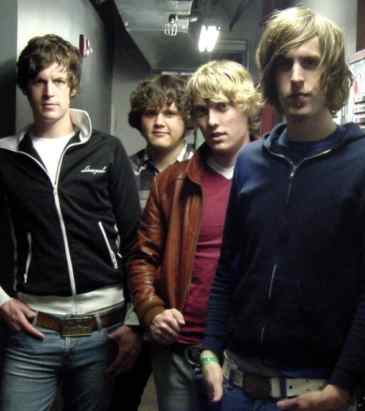 Number One Fan, a band who was just recently listed in Alternative Press as one of the "100 Bands to Know in 2005," played a close-to-home show on March 15, at The Quest in Minneapolis. The band, originally from Appleton, Wisconsin, played to a small crowd in The Ascot Room at The Quest. The show, which also featured a local indie/acoustic band named Stoughton, and well-known emo/indie rockers, Brandtson, was short to say the least.

Stoughton started at 7:00 PM, playing a quick set before handing off the stage to Brandtson, who also played a relatively quick set. The stage cleared, and Number One Fan slowly moved on, with stools and acoustic guitars in hand. Apparently, the drummer of the band got sick the night before, so they were only able to pull together a few songs. The show was over by 9:15 PM.

They sounded amazing - there's no doubt about that, but that certainly did not make up for the lack of music.

If it were up to me, I would have just cancelled the show. I know that the band felt bad about not having their drummer and, in turn, not having a full set, but it's better to rest up and have a great set as a full band and not dissapoint your fans than to give a half assed attempt and finish a show before 9:30 PM.

Like I said - Number One Fan, as well as Brandtson and Stoughton, sounded pretty good - that's not why I'm giving the show three stars. But the fact that Number One Fan thought they could just pull a quick one on us totally changed my feelings about the show.

Number One Fan's debut CD, "Compromises" is out on Universal Records, and Brandtson's CD, "Send Us a Signal" is out on The Militia Group.