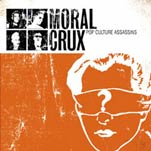 Now more than ever, American needs a punk rock band with a political edge making albums and enticing our youth, and Moral Crux has released their newest LP just in time. Pop Culture Assassins, the bands latest full length from LookOut! Records is littered with lyrics of disdain for today's lackidazy consumer going through the motions of life on autopilot.

With heavy influence from the '77 scene, Moral Crux may seem catchy and sweet, but their lyrics are more on the level of Bad Religion and the Dead Kennedys than the Ramones and the Clash. They are short and sweet, thinking man's words pointing out the flaws of our society, especially within our younger generation. Pop Culture Assassins marries beguiling melodies with sharp messages of a troubled television culture.

The song "Disaffected" is a direct poke at the commercial radio and MTV culture that our youth has grown up on, "spoon-fed this weeks rules of cool/with scripted lies that satisfy...36 flavors that all taste the same/programmers and accountants control the game/radio formatted pop/you should be disaffected." While yet another track, "New War Generation" criticizes government motives with the words, "they've got the oil/U.S. troops on their soil/politicized, criticized, consumerized, computerized/how about a Marshal plan/for the Palestinians/U.S.A. supporting dictators/to ensure cheap labor."

Moral Crux currently consists of James Farris, Jeff Jenkins, Johnny Machine and Justin Warren and this line up has been making strides in the punk rock scene since 1986. Based out of eastern Washington in the town of Ephrata, Moral Crux did not fight for a place in the 'grunge' explosion that took place in the western part of the state. Rather, this band has spent the last decade and a half touring and making powerful music together and just might be one of the most underrated bands of the time.