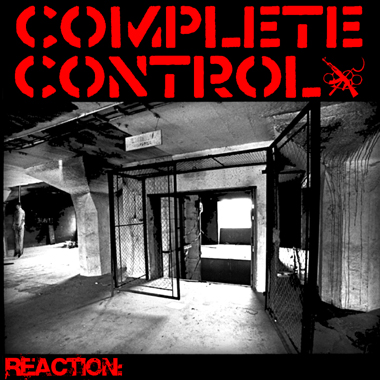 Album Review
Complete Control
Label: TKO Records
Reviewed by Janelle
Damn you, TKO, for putting out such good records, forcing me to review all these albums and bestow such sycophantic write-ups that most likely turn our dear readers' stomachs (think Broken Bottles, Smut Peddlers, Texas Terri Bomb!, Smogtown, The Crumbs - and it's still just July...). Oh well, when stuff's good, it must be given credit. And credit deservedly shall be given to Austin four-piece Complete Control (a homage to The Clash?) and their spiritedly blistering 11-track debut full-length, 'Reaction'. Here, intense streetpunk is found in abundance, with songs so anthemic they'll have the listener singing along in no time at all, and doused with enough aggression to keep one coming back for more. The strong, resounding vocals sound quite unique, as it's hard to think of another frontman with whom to compare Sam Ghanbar's style and timbre - perchance there's a slight similarity to H20's Toby Morse...maybe...? (But, really, I'm just grasping at straws here, if it's not already evident!)

In any case, super-fast, adrenaline-drenched gems (replete with thought-provoking lyrics) sure to incite pits 'round the world include the title track with its siren-like opening riff (that recurs throughout the song), "Sick and Tired", "Are You Ready", the intoxicating finale "In the End...", et al. "Blame" is another scorcher, with some profound lyrics: "With arrogance we act surprised/We police the world and we cheat out the deprived/A deserved tragedy that we had coming/And the price you'll pay for your leaders lies..." Yet, perhaps the greatest track of them all is the (somewhat) slower, highly affecting (but still undeniably powerful) "Locked In". Strange that a band who thrive on a full-on speedy energetic assault can excel so well when they let go of some of the aggression. A similar assessment can be said of the penultimate track, "On the Outside".