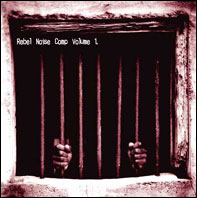 Album Review
Johnny Cheapo, Riotgun
Reviewed by Abner
Ok here goes ...you all know me the ultimate in disgruntled bitter old punkers longing for my days of yore, the days when punk was punk and everything else was shit. Now with that disclaimer aside I was pretty impressed by JohnB's maiden voyage on the great cruise ship we all call the compilation. Some of the Highlights were White Trash Debs and Cop Outs as well as Broskys and last but not least Blue Collar Special(dont ever tell anyone I said that). I also love the Aggressive sound of Los Creepers reminds me of the days of the El monte/La Puente back yard gigs,these guys rocked it out. I also kinda liked the poppy band Reagle Begal...this is what would of happened if red cross and ramones joined each other(with a little pansy divison thrown in, with out all that fag stuff). Another band I liked was the violent disturbing attack of Bullet Treatment...good stuff guys. Dead beat sinatras are good but very much like a early social D at least on this song, I would like to hear other songs by them. Ok here goes now the bad stuff... Ok guys it is time for Mad Parade to stop it, You people out there have gotta understand that back in the day when the music scene was fresh in SGV there were real bands out there in the pits of the back yard scene rocking out every day. Bands Like Flower Leopards, Catch 22, Secret Sin, Modern Industry, Powerless Fowers Black Jax, even X-O Toxins(with Felix singing, cuz with dean it was plain shit) tore it up weekly. And here comes a band Like Mad Parade Little rich ass Bastards with White leather jackets and brand new amps and kick ass vehicles( ok sounds a little Jealous I know...But I grew up In Baldwin Park so fuck those rich ass bastards) They were so stuck up everyone hated them locally but now they are back and I for one say hell no.. Enough of my ranting. Truth is that I will say that JohnB deserves some respect for all the work he put into this and I only hope the bands will help with promoting the cd cuz Overall I give it a Thumbs up!