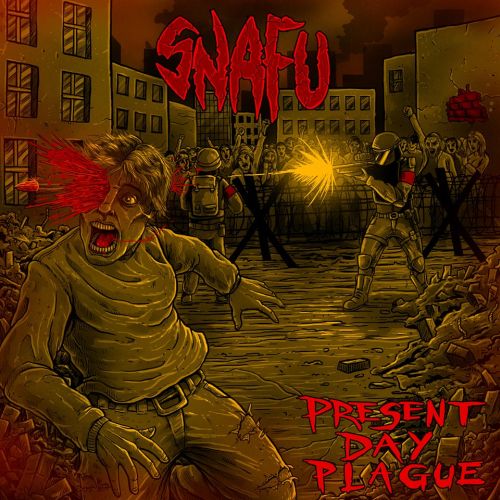 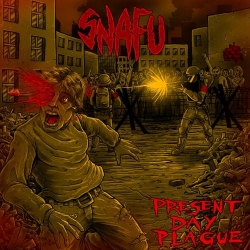 Scott (guitar, vocals), Rian (guitar, vocals), Mickey (bass, vocals), and Ryan (drums) of the Detroit-based band SNAFU (AKA S.N.A.F.U.) have created a mutant-cool hybrid style of thrash metal and punk rock with stabs of hardcore, grind, and death metal on their sophomore album, Present Day Plague, which is set for release on August 7th.  The album was recorded, mixed, and mastered by Chris Trestain at Trestain Studios in Detroit, Michigan.  The band’s debut album, Fear The Future, dropped in 2013 and was later released on Profane Existence.

The guys mix the antagonistic attitude, brief and raw song structures, and gang and shouted out vocals of punk rock with the relentless, super-quick, and heavy guitar riffs and drums of thrash metal.  This wicked brew is topped off with intense, dire lyrics that fit in both genres.  Present Day Plague is a well-executed concept album, at least sonically and vocally, but most times the lyrics can’t be completely heard and understood, which undermines the themes of the album.  The album is also jam-packed with 19 songs and the full-on aggression and speed are hard to take over its length, even though most songs aren’t that long.

Present Day Plague opens with the ominous “Subhuman Scum”, all simmering distortion and what sounds like TV News audio snips that pit the police (“Our law enforcement agents are becoming more like the military.”) against the citizenry (“…people have become so out of control.”) and vice versa.  Next number, “Her Dark Past” launches into corrosive blasts of guitar, an emphatically bashed drum beat, bass guitar clang, and alternating shouted out vocals about “her sickness” and how “It’s too late.”  A thrash attack lunges at the end of the tune along with switched up gang and individual vocals.

Death metal vocals and drawn-out, doomy guitars occasionally weigh on “Death Trip” which otherwise employs speedy thrash guitars, a pounded out drum beat, and shouted vocals.  The previous onslaught is mitigated a bit by the changeable “”A Trade to Abduct” that sporadically slows down the pace to noise-rock level, allowing for some breathing space.  The shouted male vocals are a little clearer (“We’re all sitting ducks.”) and are backed at times by growled out vocals.  The band members have the musical chops and show off their versatility here with quicksilver guitar morphing and kinetic drum rhythms.

“Eternal Nocturnal” features throat-ripping vocals from guest artist Jason Navarro, a more prominent bass line, and wall-of-sound guitar squall.  “Great Deceiver” adds audio of a religious evangelist droning that there are “evil elements” in the world and that “Martial law is in effect.”  Screamed out and heavier doom vocals and scrambling guitars mark the frenetic to ponderous “Body of Suffering”.  The guys let fly on “Digital Prison” as the vocals change up between gang chants and exasperated shouts that zoom along with screaming guitar lines and smashed drums.

At the album’s midway point, lead single “Unchained” rampages through with a hard-charging drum stomp, ripping guitar riffs, deep bass line, and shouted out punk vocals between two of the band members.  “The Human Infestation” features guest artist Shawn Knight on spoken vocals as he issues a dire warning about the “Parasites of the earth / Glorified fleas…” who are full of “rotten thoughts” and “diabolic intentions” for killing their host.  A thumped drum beat and short, but heavy guitar riffs shake through “Dead Before Dawn” before breaking loose with a rapid drum beat, raging guitar riffs, and sing-shouted vocals yelling about a “system of terror”.

“One From None” slogs through the mire before quickly rising with a romping bass line and cantering drum beat.  Distorted guitars race through the tune as the sing-talking vocals twist and turn over the possible lines “Your mission is to walk again yourself / What you do and what you become begins and ends with you.”  Once again, and as always, the lyrics are hard to make out, which really diminishes the impact of the song.

Menacing bass line runs, chanted gang vocals, and aggravated guitar distortion pile on “Memphis LSD” as the slammed drum beat marches on double-time.  The guitars build to a frenzied conflagration by the end of the track.  Metal guitar riffs ring out on “Hand That Feeds” as the bass and drums thickly churn behind the indiscernible, shouted out vocals.  Last track “Millions of Useless Eaters” returns to the album’s start with TV News audio of a man intoning the words “subhuman scum” until a high pitched beep closes out the incendiary chronicle of human over-consumption, confrontation, and destruction.