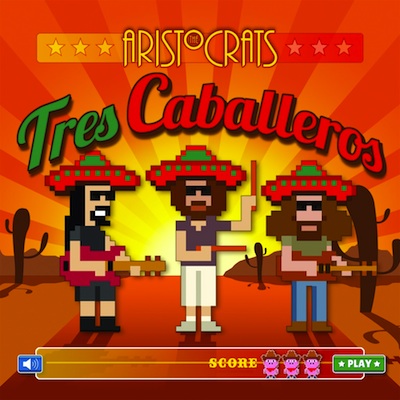 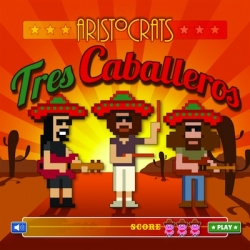 ‘Tres Caballeros’ is another fine entry in the Aristocrats catalog. It’s arguably more daring, refined, and confident than its predecessors, which allows it to circumvent the inherent repetition of the style very well.

With their first two studio releases—The Aristocrats (2011) and Culture Clash (2013)—rock/jazz fusion trio The Aristocrats proved to be among the most fascinating, inventive, and skilled projects in the field. The group consists of guitarist Guthrie Govan, bassist Bryan Beller, and drummer Marco Minnemann, all of whom have many impressive credits to their name, including stints with Asia, Periphery, Steve Vai, James Labrie, and Mike Keneally. (In addition, both Minnermann and Govan are part of Steven Wilson’s solo band.) Always busy and prolific, The Aristocrats never seem to take a break, which is why it’s not surprising that their third LP, Tres Caballeros, arrives mere months after their latest live album, Culture Clash Live! Likewise, fans would expect nothing less than another incredible collection of intricate, dynamic, and playful constructions, which is exactly what the record delivers. Despite some inherent repetition, Tres Caballeros is another amazing effort that’ll delight fans of the band (or the style).

According to Govan, the new record demonstrates how much the trio has grown since forming in 2011. He adds, “our sudden urge to become more bold and experimental with overdubs rather than feeling any pressure to record exclusively in a strict ‘trio’ format . . . had some kind of positive effect . . . plus, I think the material on this album is some of the most interesting stuff we’ve ever written . . .” Without a doubt, Tres Caballeros features not only some of their best material, but some of the coolest modern fusion in general.

In addition to being amazingly talented, the boys also are extremely humble and humorous, so their work is filled with tongue-in-cheek titles and, when performing live, self-deprecation. It makes sense, then, that the opening track here is called “Stupid 7” (a reference to its central time signature). It bursts into being with the sort of guitar patterns that made King Crimson and Mahavishnu Orchestra such revelations, and it never lets up, allowing the rhythm section to steal the spotlight at times with incredible syncopation and monstrous bass lines. Halfway through, Govan issues some immeasurably fast flashiness, which is really cool, and the way they oscillate between the main parts and various deviations is remarkable. This is how to start an album.

“Jack’s Back” (which likely has some tie to “Furtive Jack” from their debut) is slower and sparse at the start, like an elegant yet tense dance of notes and beats. Halfway through, though, it erupts into grungy madness, with sharp timbres presenting tasteful motifs. It shifts temperaments often too, making it one of the most engaging and surprising pieces here. Afterward, “Texas Crazypants” has a definite southern vibe, evoking ZZ Top and The Allman Brothers with its frantic riffs and classic tones. Near the end, distortion, hand claps, and even a car crash spice up the arrangement to showcase extra liveliness. Of course, it’s also dizzyingly complex but also undeniably accessible.

Later on, “Smuggler’s Corridor” has a Latin influence, with tambourines and dramatic six string counterpoints and effects evoking the Western showdown spirit of films by Robert Rodriguez and Quentin Tarantino. It’s also a nice change of pace for the sequence overall. Another sardonic title, “The Kentucky Meat Shower” goes for a more ‘80s metal vibe near the end, which follows some astounding instrumental banter between Govan and Beller. The latter keeps things going impeccably throughout Tres Caballeros, but he really stands out on this track, as does Minnermann, who follows along with plenty of creative flourishes. The LP concludes with its longest track, “Through the Flower,” an intense journey that supplants spasticity with strong focus and drive. The way it uses space to build momentum and emotion is great.

All in all, Tres Caballeros is another fine entry in the Aristocrats catalog. It’s arguably more daring, refined, and confident than its predecessors, which allows it to circumvent the inherent repetition of the style very well. The trio proves once again how suited they are as a package, complementing each other perfectly so that the music truly feels like an immaculate vision of bravura, technique, and friskiness. The Aristocrats is still at the top of its game, and Tres Caballeros is probably their strongest effort yet.

Note: the deluxe edition also comes with a DVD of bonus studio and live footage, demos, and alternate takes, all of which are very interesting and enjoyable.