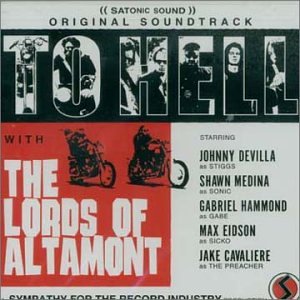 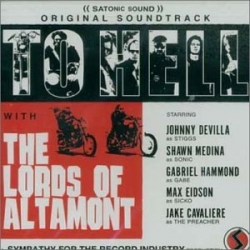 What can I say other that I am a sucker for a band with a shtick. So if you're headin' off to see the Lords of Altamont, lace up those Harley boots and dust off your colours, because this band is ridin' in and Hell's coming with them!

To Hell With the Lords, the bands first full-length release on Sympathy for the Record Industry, is 12 tracks of thrashing, melodic, b-movie biker style rock n roll. It's full of foot tapping, hip-dipping, back beats married with go-go inspired organ melodies. Feed it all through a fuzz pedal and you have a Mudhoney meets Murder City Devils style garage rock band with simple, catchy party anthems reveling in one night stands and rockin' all-nighters. There are the butt-shaking remnants of front-man Jake Cavaliere's pervious band, The Bomboras, but rather than fun in the sun, it's more like having your beach blanket bingo bash crashed by the Straight Satans.

With all the hype garage-rock bands like the Vines and the White Stripes have received over the last few months, it makes me wonder where the A&R men have been while Lords has been busting their asses across the country. Scoring slots at SxSW, GearFest and the San Diego Street Scene, the band has surely had some great exposure. Shame on me for thinking the "majors" have any real taste.

For those who've caught them live and enjoyed the show, To Hell... might not seem like it does the band justice, but the album does stand alone as a well-captured studio performance.