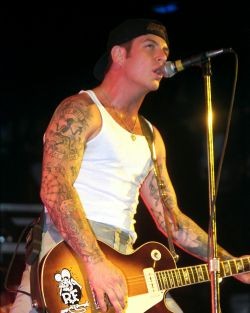 For the last three years Social Distortion has been House of Blues' resident artist to welcome the upcoming year, and each year has been a gradual increase in a stint of sold out shows. The first year saw some 10 to 12 sold out dates in Anaheim and Hollywood combined. This time around they've played close to 20. Saturday night was the final show of the '02 - '03 HOB tour in Hollywood and proved Social D. - particularly Mike Ness - are geared up for a productive year.

In front of a huge, banner backdrop of the band's seminal album cover "Mommy's Little Monster", Ness swore to God a new, long-awaited Social D. album will be out this summer. Although the band's last studio album was released over five years ago, it seemed the crowd - made up of newbie fans and old-school diehards - weren't necessarily craving new material. Mike Ness and company were keen to this and delivered an energetic set of old and new songs. Included among the old were "Mommy's Little Monster", which Ness pointed out was over 20 years old; older than some of the fans in attendance, yet its message still fresh enough for them. Others which were even older included "1945" and " Emotional Outbreak." Newer, yet to be released, Social D. tunes spoke of enduring life with all its trials and tribulations - an ever-present theme in post "Mommy" albums. The guitar-fueled "Don't Take Me for Granted" was written for the band's late rhythm guitarist, Dennis Dannell who died suddenly in February, 2000 of a brain aneurysm. Although musically fashioned as a slow-swaying rock ballad, the song "Footprints on the Ceiling" still kept pace with the set, just as much as the melodic groove of "Angel's Wings" which depicted the life of a broken home and its ill effects on children.

In a word, endurance could be used to describe the themes in Ness' songs and Social D.'s history. After they released "Mommy's Little Monster", the band disappeared into the pitfalls of sin, and it seemed Ness would become a punk rock tragedy found dead somewhere in Orange County of a heroin overdose. However with the release of "Prison Bound" in the mid 80's, Ness resurrected the band's presence in the punk scene. The album revealed a sober-minded Mike Ness, signified his renewed attitude about the business of living and exposed unlikely musical influences. Albums that followed were a discovery into his life and a whole generation of "sick boys" and girls identified with his tough, yet vulnerable persona. Ness's songs of love, hate, loss and pain have been striking an emotional chord with punk fans for over 20 years and continue to reverberate with each new generation. Judging by Social D's upcoming new material, the band will strike those same chords later this year with a new album. If they continue their yearly HOB residence, expect a stint of even more shows at year's end and early 2004 - all sold out of course.