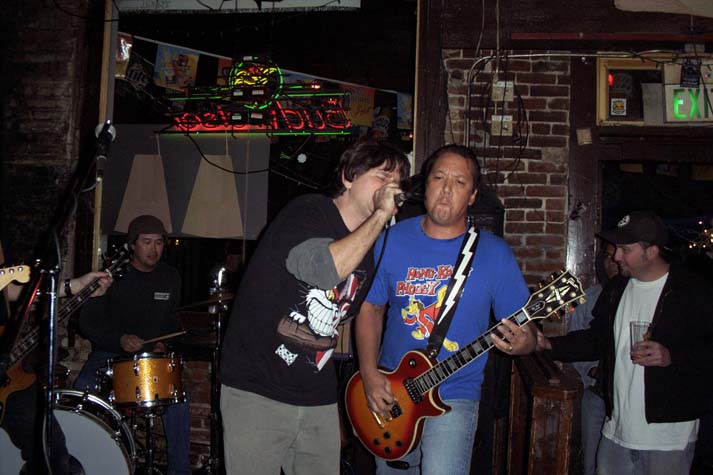 This was a Black Power Records showcase at the Old Town Pub in Pasadena. After much delay and lame excuses, here's the damned review, Abner and John. You guys don't forget, do you? Just 'cause I got in free...

It was raining like hell as we drove to that quaint dive in Old Town Pasadena to check out the show. This place is like an Al's Bar in Pasadena complete with indoor smoking and pitcher beer, but with better bathrooms. Remember Al's Bar bathrooms--what a disgrace they were. Geez, I miss that place...

The first couple of bands were missed as we arrived late to the show. But as we walked into the bar some freaky-ass metal meets Tool-ish band was blasting and I managed to capture a picture of the singer. Man, this dude looked and sung scary-ily.

Next up were the Cop Outs who rocked the house as they always do. They have an early punk sound mixed with traditional rock n' roll. One thing I wanted to hear greatly was the singer who could hardly be heard over the amps and drums, but regardless his presence was definately felt as he sqirmed his figure throughout the set. His mom even showed up to the show to cheer for her little mijo.

Finishing off the night was Tony Adolescent's current band, the Adz. They play a metal-ish mix of punk tunes. I loved the Adolescents, I liked some his later things, but I'm not so hot for the Adz. Their sound has too much of a metallic ring for my tender ears. I wished they would tighten up and punch up their tunes a little. More PUNK and less of that metal shit.