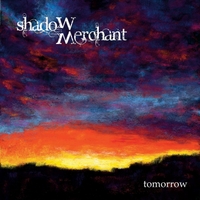 Tomorrow is a remarkably consistent and engaging album that—to be blunt—manages a finer balance between virtuosic playing and tasteful singing/songwriting than many of their more established contemporaries can muster.

With the release of 2014’s debut LP, The Tunnel, Philadelphia-based outfit Shadow Merchant cemented itself as one of the area’s most promising new progressive rock acts. Having had several years to hone their craft, the band was met with plenty of acclaim for their ability to balance earnest and refined songwriting with complex yet very welcoming and fitting instrumentation. It’s not too surprising, then, that their recently released follow-up, Tomorrow, finds them perfecting those traits in the midst of expanding their range and styles. As such, it’s an even stronger album that should bring them even more accolades, attention, and opportunities.

Citing many classic acts as influences (including Rush, Kansas, ELP, King Crimson, and Renaissance), Shadow Merchant has played at many local venues, such as the Keswick Theatre and World Café Live, as well as arguably the most esteemed genre festival in the country, RoSfest, this past May. While founding guitarist Sean Reiter and original bassist/vocalist Howard Whitman remain, the group is now completed by three newer members: vocalist Yvonne Blackwell, keyboardist Michael LaBuono, and drummer David Lee. Fortunately, these changes have resulted in the best line-up possible for Tomorrow, with Reiter concluding, “Everyone performed at peak level, and the quality of production we achieved with Brett [Caldas-Lima, mixing] is nothing short of astounding. We feel this CD represents a huge leap forward for the band. . . . Tomorrow represents a great new beginning for the second incarnation of Shadow Merchant.” It’s really a superb record from start to finish.

Opener “Invisible Energy” does a fantastic job of showcasing how well the quintet works together. From its forceful, almost prog metal opening riffs, percussion, and synths to its smooth and fetching melodies (with which Whitman and Blackwell demonstrate great vocal congruence), it’s a really gripping way to start. (Of course, the brief guitar and keyboard solos are highlights, too.) Fortunately, they continue to perform with shared elegance on the highly catchy “Moving Standing Still” and the introspectively robust “Everything.” Naturally, Blackwell also proves quite adept at offering soaring dominance on “A New Life” and vulnerable reflection on “Stars” (which, like “The Beginning of the End” and the wordless “Valkyrie”, also finds the group going all-out on their inventive and intricate instrumentation).

In keeping with genre tradition, Tomorrow ends with a lengthy eponymous suite; specifically, “Tomorrow” is broken into six parts, and each one is exceptional in its own way. For instance, “Silhouette” radiates pathos with its central guitar riff and dejected choral storytelling; afterward, “Questions” provides a frenzied contextual score before “Summer” sees Blackwell lamenting over a lovely piano and string arrangement. Likely the most arresting portion, however, is “Adelaide” due to how Whitman’s affectively assured singing is complemented by a hypnotic harpsichord motif, another great guitar solo, and a restrained yet fitting rhythmic plan. The penultimate “Empty Space” acts as a progressive metal moment of conflict to give finale “Tomorrow” even more cathartic and conceptual weight. The duo’s repeated chant of “Feel the joy and deal with the sorrow / Can’t negotiate, no time to borrow / Live for today but plan for tomorrow” helps them connect with the listener, evoking a cumulative sense of return after an epic journey. (That the sequence begins and ends with birds chirping is an effective touch as well.)

As great as Tomorrow is overall, there are some very minor issues with it, too. For one thing, the group can wear their influences on their sleeves a bit too much at times (such as how the openings of “Stars” and “Valkyrie” channel Kansas’ “Song for America” and Dream Theater’s “A Nightmare to Remember,” respectively, a bit too closely). Also, some of the lyrics can be a bit too on-the-nose/cliché and/or saccharine /cheesy (“Help me now, get my feet back on the ground / Help me now, I was lost but now I’m found,” from “Stars”), and Blackwell’s choruses on “The Beginning of the End,” while quite good technically, also feel a bit rushed in terms of phrasing, as if she’s eager to catch up with the rest of the measure. Of course, none of these things really take away from how strong the LP is, but they do stick out once you notice them.

Despite those small grievances, Tomorrow is a remarkably consistent and engaging album that—to be blunt—manages a finer balance between virtuosic playing and tasteful singing/songwriting than many of their more established contemporaries can muster. Whitman and Reiter continue to lead the charge with great ambition and ability, while LaBuono, Lee, and (most transparently) Blackwell fit right in and help elevate what Shadow Merchant can do as a collective unit. If you’re a fan of the genre, you won’t want to miss it.