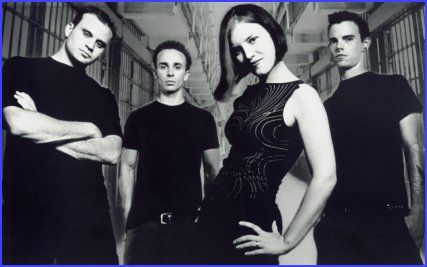 Well well well. Grammatically correct? Probably not. What I'm thinking...pretty much... Let me just say, I love this band. I can't be harsh. I just love them. Agent M - my god she is what every girl at these shows wants to grow up to become, since giving up on Gwen Stefani that is... I can guarentee that many of the men in that crowd were looking up to her too, in other ways of course...this goes without saying, but the girl is hot! Don't let me give too much attention to the front-woman here though... Tsunami Bomb as a whole is an amazing band.

This was my third time seeing Tsunami Bomb play, I'm more impressed this time though, from a performance standpoint. This band has basically pushed and shoved their way into the spot light over the course of the past two years. They've released 2 full length albums and an EP to date, not to mention almost endlessly touring. That's not to say that their live shows are running low on juice though.. Tsunami Bomb packs a mean punch enough for every member of the audience to get a taste of what a real show is all about. And they did an awesome job getting the crowd pumped for Motion City Soundtrack. Kept the crowd going with very short break between songs.. Aside from the differance in genres, Motion City Soundtrack couldn't ask for a better supporting act for this show.

Oh yes, the pitt was good. Not the best or the hardest I've ever seen by any means but it was good sweaty fun for the most part. Most of the kids that came to this show were definately there to see Motion City, at the same time though, they all seemed to appreciate Tsunami Bomb for what they have to offer.

Tsunami Bomb provided an all and all good set for the kids, never a dull moment!

Set List..
Take the Reins
Say it if you mean it
5150
Roundabout
Top 40 hit
My machete
Swimming Through Molasses
Dawn on a Funeral Day
El Diablo
Jigsaw
...not forever

Love in the Fascist Brothel