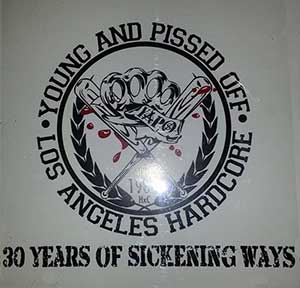 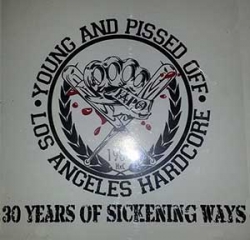 SoCal hardcore stalwarts prove they still have it after 30 years

Tough and mean, hard and fast, yeah, there’s definitely a lot to like on old-school hardcore stalwarts Y.A.P.O.’s latest record, 30 Years Of Sickening Ways. The guys, who’ve been at it for 30 years as the album title suggests, kick it all off with the hard-hitting “Sickening Ways” and keep hammering away on exceptional tracks like “Imminent Doom,” “Something To Say,” “Checkpoint,” “Into The Night,” the out-of-control “I Animal,” and “Won’t Except.” But perhaps the most powerful of all is “Almighty” with that great mid-song breakdown accompanied by simple yet affecting lyrics: “They lie! They fuckin’ lie! Lie!” and the ensuing, “You have your fuckin’ agendas/You push your morals down my fuckin’ throat/But you don’t see the subcultures we’ve created/There’s a thousand angles to my madness/Your fuckin’ system’s shit…” And in addition to their original tracks, Y.A.P.O. include an admirable version of GG Allin’s down-on-your-luck crooner “When I Die.”

Still, despite all this goodness, there are a couple places that are a little sub-par, namely “Happy” and the last track, a slam poetry offering that is reminiscent of some of that cringe-worthy chalk-it-up-to-being-young ‘80s stuff by Code Of Honor and the spoken word of Uniform Choice on Screaming For Change. Still, despite these small missteps, this is a great offering from a band who have proven themselves over time and deserve much respect.