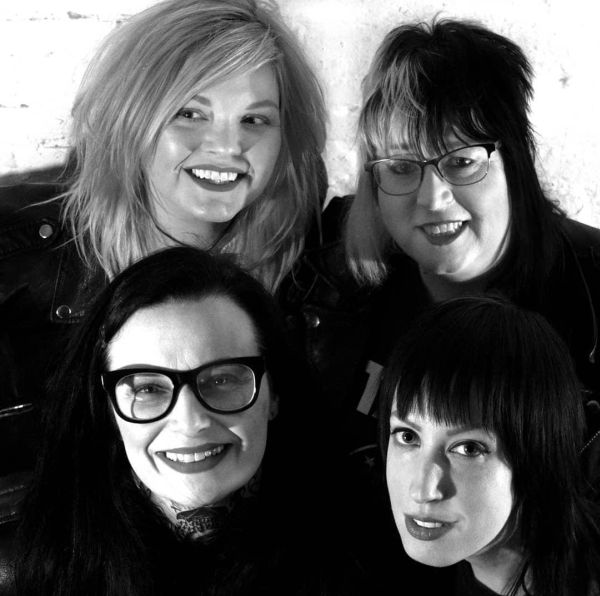 Just in time for Mother’s Day, Philadelphia-based fun punk rock band the Ramoms, who actually are mothers and who love the Ramones, return with a new kick-ass EP. Named Problem Child, the EP is being delivered via Pirates Press Records.

Jodi (vocals), Sharon (guitar), Molly (bass), and Ginger (drums) have been rocking out between play dates as the Ramoms, a Ramones tribute band, for a couple of years now.

While they mostly rock cool covers of Ramones songs, they also shake it up with parodies like “LEGO Blocks”, which incorporates their family lives with kids and is a take-off on the Ramones’ “Chinese Rock”. (That tune came out on a split 7” with Dad Brains, a punk rock band of dads into Bad Brains, this past Christmas).

Rebel Noise is psyched to host the premiere of Problem Child in full. There are no growing pains here; just three dynamic and catchy tracks to blast to the max.

Mixing their Philly roots with the Ramones classic “Judy is a Punk”, Romoms serves up a tasty treat with the witty “Gritty is a Punk.” For those not from the area, or not into ice hockey, Gritty is the wild newer monster mascot for the Philadelphia Flyers.

The slammin’, speedy “Boogie Not Snot” (a re-make of “Blitzkrieg Bop”) will delight the most hardcore Ramones fan – and any mother who’s dealt with her child’s stuffed-up, but about-to-blow nose - and hell, anyone who listens to it.

The Ramoms end the EP with a faithful, no-frills cover of the Ramones’ “Rockaway Beach”, as tuneful and driving as the rest of Problem Child.

Problem Child kicks up a ruckus on May 10th in 7” blood red vinyl format through Pirates Press.

Molly Ramoms also took some time out of her work/life schedule to chat about the band and their music.

Hello Molly! So good to connect with you about the Ramoms. What was the spark that made you all kickstart the band, besides your obvious love of the Ramones?

Jodi literally IS the spark! She’s always played punk for her boys, changing the words to make them funny or kid-friendly, and eventually the concept just clicked. She approached Ginger and Sharon last summer, and I joined the band this past February.

You pay tribute and have fun with Ramones songs to spirited and infectious effect. What is your most fave Ramones track to listen to and/or to perform?

We’re all over the place! Jodi loves “Outsider”, Sharon loves “Pet Semetary”, Ginger loves “Miracles”, and I love “Bonzo Goes to Bitburg”. But in our set, our favorite is probably “Havana Affair”. The group vocals are really fun and Sharon does a great grunt in the chorus!

How has city life in Philadelphia shaped your music and outlook?

I think I’m the only one born and raised in Philly and I have to say, it played a huge role in my life. I still regularly hang out with the same people I was first going to shows with 15+ years ago. Philly has such a great, supportive scene and it’s amazing to see my friends continually forming new bands and putting out new music after all these years. Sharon put it best when she said it has attitude and open arms at the same time and reminds her of what NYC used to be.

Are there any other acts/artists you cover?

All Ramones all the time, baby.

Are you considering writing original material for a future release?

Absolutely. Parodies and tributes are great, but it’d be a real shame not to take advantage of playing with such talented women.

You’re all working moms. How is the job/family balance going?

Ginger’s son is 23 and has been long out of the house, plus she works for herself, so she’s probably got the most flexibility. Jodi’s on the other end of the spectrum, with three boys under 11. Luckily, her husband is also a musician and they work together to encourage each other’s band pursuits. Ultimately, we all have a lot going on in our own lives, personally and professionally, and so we really enjoy the time we get to spend with each other at practice, shows, or just doing too many shots of tequila.

Can you give some backstory to “Gritty Is A Punk” for those who aren’t familiar with the Flyers’ new mascot?

When the Flyers debuted this mascot, I think everyone’s first reaction was confusion mixed with horror and then… unabashed pride over this odd-looking, bratty, abrasive Muppet reject. If that isn’t punk, what is? He’s here, he’s weird, get used to it!