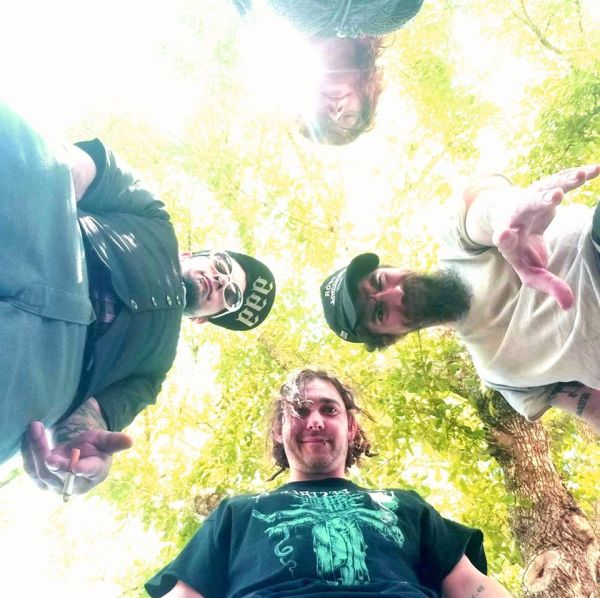 Punk/folk/metal/crust band Escape From The ZOO drop a bone-crunchingly fun video for their catchy and dynamic track.

Veronica Pullis (mandolin, vocals), Jesse Sendejas (guitar, vocals), Corey Page (bass, vocals), and Jessie Onion (drums, vocals) defiantly to triumphantly romp, stomp, thrash, and bash their way through their socio-politically relevant and scathing lyrics. Listeners will reel from the heady, punch-drunk sonic mash-up, that also include a touch of pop melodics to make the sound go down like the last bottle of brew on the planet.

Rebel Noise is stoked to host the premiere of the engaging, and at times comical, video for the exuberantly upbeat, yet lyrically bleak (or, well, realist!) “Crackpipe”, a track off Escape From The ZOO’s All Cells Are Bogus split 7” vinyl with Skull Caster. The record released in the fall of last year, but the tunes are still going strong!

The video is part live performance and part professional (and amateur) wrestling hijinks involving the band members who offer their bodies up to twisted headlocks and bone-crunching bodyslams from skilled wrestlers.

Fresh off a tour of the Midwest (Well, the last date in Dallas is tonight!), Jesse relates, “The video features local Houston wrestlers from Doomsday wrestling. Shot and edited by Brandon Walsh of Punk With A Camera. Super-fun filming!! Veronica got bodyslammed by Charlotte 3 or 4 times to get the shot and she kept forgetting to tuck her chin. She hit her head pretty gnarly a few times. A dizzying experience for her, but as a kid she wanted to be a wrestler so she had a blast. A bit of a dream-come-true type of deal. Our video is a subtle parody of Weezer's “Hashpipe” video. Glasses, wrestlers, heavy down-strum guitar, etc. The song’s just about dealing with addiction and depression, and the vicious cycle that forms when the resolve of an internal struggle becomes the root of the issue.”