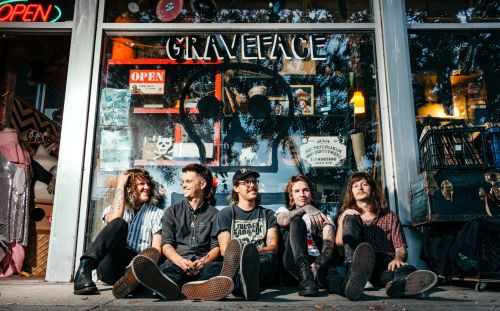 Graveface Records releases a far out garage/stoner/psych-rock album on its new imprint.

Recording label Graveface Records, and independent music company owned and operated by Ryan Graveface, is expanding its reach with a new imprint that focuses on the Savannah, Georgia region where it’s based.

Graveface Records & Curiosities kicks off with the August 31st release of the self-titled second album from Savannah garage rock (with a wild streak of psychedelia) band Rude Dude and the Creek Freaks.

Rebel Noise is excited to premiere this vivid cornucopia of sounds on the day of its release. The band is a collaboration of best friends that has grown from a trio in 2016 to a five-piece that has played numerous shows throughout the city. Debut album Acid Bath dropped last summer and the new LP was recorded in Athens, Georgia.

Rude Dude and the Creek Freaks is ripe with roiling garage rock, heavy stoner vibes, and laid-back psychedelics to fit every state of consciousness. Tune in and drop out for a while…