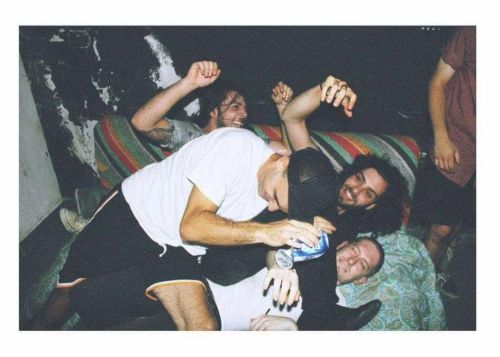 Cruel Experience are an Italian garage/fuzz outfit that formed in the city of Lucca in 2013 and have toured through Europe and the UK. Their upcoming Seasons EP arrives on August 1st via Santa Valvola Records.

Cruel Experience’s first EP was a lo-fi musical run, but they stepped it up on Lives Of Ugly Demons, unleashing a heavier, psychedelia-stamped sound.

The band has now shed both the lo-fi and psychedelic elements for a more direct and hard-charging style on new EP Seasons. It was recorded, mixed, and mastered by Alessandro Sportelli at Recording Studio in Pisa, Italy.

Rebel Noise is stoked to host the premiere of the gritty and galvanizing record a week ahead of its official release.

First single “Alleys of the Night” (with accompanying video) is staccato-paced at the start and then revs up to a driving press with a shouted out refrain, kicky drum beat, and wavering, but vivid guitar line.

The rest of the four songs on the EP are even more propulsive, and filled with restless and noisy garage rock guitar grind, low-end bass line trudge, emphatic drum strikes, and emotive, at times chanting, vocals with all the band members participating.