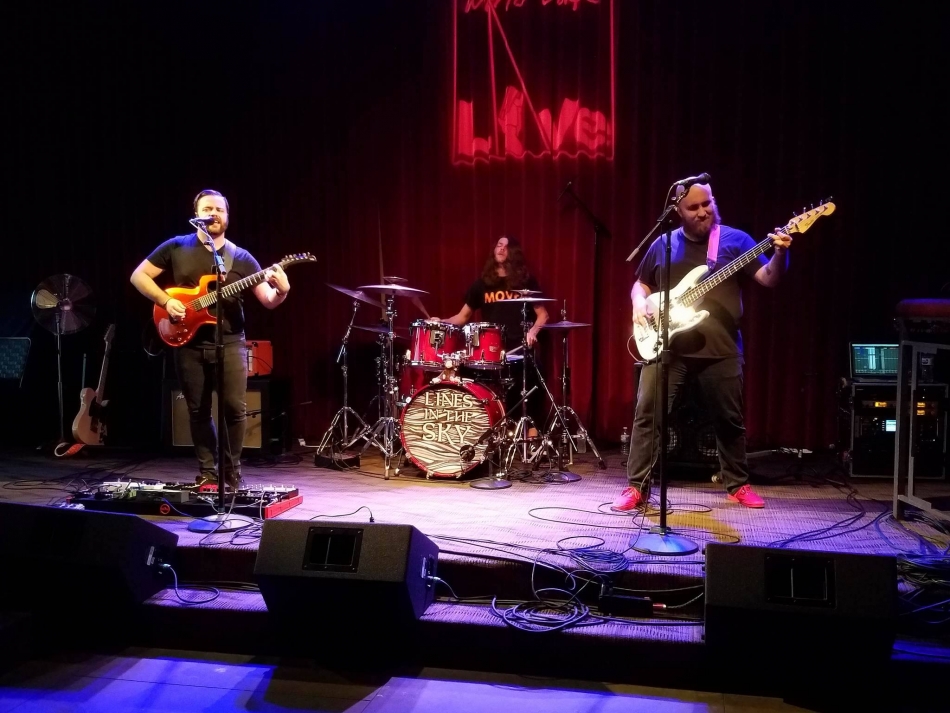 Lines in the Sky

Although it was a relatively short night of music (due to factors outside their control), both bands provided plenty of incredible playing, alluring songwriting, and humble banter to make the sets quite enjoyable.

You might not know it at first, but the Philadelphia area has a relatively thriving progressive rock/metal scene, not just in terms of artists—although there are many, like Out of the Beardspace, Shadow Merchant, The Red Masque, iNFiNiEN, In the Presence of Wolves, and of course, Circa Survive, among others—but also in terms of fanbase. It’s not too surprising, then, that another one of its strongest acts, The Madeleine Haze, recently joined Nashville trio Lines in the Sky when they appeared at World Café Live this past Wednesday, August 9th. Although it was a relatively short night of music (due to factors outside the bands’ control), both provided plenty of incredible playing, alluring songwriting, and humble banter to make the sets quite enjoyable.

Comprised of brothers Jesse and Bo Brock (vocalist/guitars and percussion, respectively) and Ben McAnelly (bass), Lines in the Sky’s assortment of influences—such as Devin Townsend, Peter Gabriel, Coheed and Cambria, and Meshuggah—helped make their past two LPs (Hilasterion and Parallel Travel) so engaging. Naturally, they included several tracks from those records; for instance, they began with “Nereus,” whose intricate rhythms and high-pitched melodies evoked The Dear Hunter and Thank You Scientist, and eventually brought out “Feed the Wolves,” complete with serene harmonies and effective backing effects. Elsewhere, “Not About You” really showcased Jesse’s penchant for poppy songwriting and singing, while “Teeth” conjured the spaciness of modern BTBAM and “Admiral” offered perhaps the most drastic and impressive dynamic shifts of their set. These selections, coupled with other equally impressive ones (including a beefed-up cover of Sting’s “Seven Days”), exemplified how well Lines in the Sky can mesh inspirations into an original sound. Plus, their self-effacing interactions with the crowd in-between songs brought an added layer of likability to the performance.

Having been described as “Rush after a case of Red Bull” by genre pioneer Mike Portnoy, The Madeleine Haze (vocalist/guitarist Zack Göebbel, bassist Richard Dean Wilson, and drummer Dan Dalton) took the stage shortly after and delivered a substantially fiercer sequence. In fact, they replicated the entirety of their unreleased next studio album, The Age of Wolves, which consisted of four tracks: “The Guild of Assassins,” “Embrace Me,” “Darlene Aquarius,” and “The Age of Wolves.” The first two featured a really fine balance of lightness and heaviness (even venturing into thrash at times), with Dalton channeling John Bonham in his syncopation and Göebbel dishing out ample six-string wizardry and soaring verses. “Darlene Aquarius” (which Göebbel wrote about and dedicated to his aunt and uncle) carried an early ‘90s grunge vibe at first and found Wilson dishing out a lot of colorful and technical bass lines, whereas the multi-part title track was a lengthy tour-de-force of skill, imagination, and variety that further cemented their place as three of the best musicians in the area. As a bonus, they finished with “Manhattan Pt. I,” the bouncy penultimate beast from 2014’s Noble Lies & Pious Frauds.

Although the show was relatively short in duration (about two hours), Lines in the Sky and The Madeleine Haze brought their A-games to ensure that there wasn’t a wasted moment. Indeed, each packed a staggering amount of jaw-dropping instrumentation, compositional diversity, and melodic appeal that served to both established their individual prowess and complement each other very well. In addition, they generated a lot of anticipation for their upcoming records—neither of which can come soon enough—and demonstrated why the World Café Live (and Philly in general) is such a great place for progressive music.