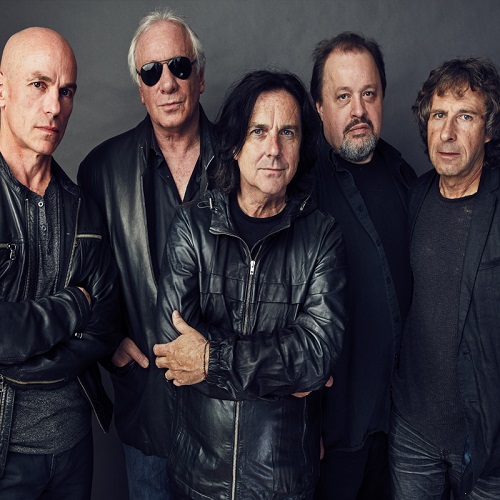 Considering that it formed in 1979 and released eighteen studio records thus far (fourteen since its last line-up change, when vocalist Steve “H” Hogarth replaced Fish in 1989), it’s fair to say that English quintet Marillion is among the most enduring, beloved, and striving progressive rock bands of modern times. In fact, its most recent offering, F E A R (Fuck Everyone and Run), has been touted by many critics and fans as Marillion’s best album to date, and for good reason, as it fuses wonderful melodies and instrumentation with a starkly powerful and relevant slice of political/social commentary, all in an attempt to (as their motto goes) help their listeners “find a better way of life.”

Naturally, a work of such breadth deserves the proper treatment in a live setting, and fortunately, that’s exactly what Marillion achieved this past Sunday, when the group headlined at the Keswick Theatre in Glenside, PA. Preceded by an enjoyable set from American singer/songwriter John Wesley, Marillion’s roughly two-hour performance with an astounding blend of colors, thematic projections, and of course, stellar music that demonstrated just how special and crucial the band still is roughly forty years after its inception.

Although he’s best known to a lot of genre fans for his involvement in the now-defunct Porcupine Tree, vocalist/guitarist John Wesley has carved out a highly impressive solo career over the last two decades. He’s also toured with Marillion several times in the past; this time, he’s doing so in promotion of his eight full-length, A Way You’ll Never Be, so it’s no surprise that he took the stage at 8:00 pm and opened with the record’s first track, “By the Light of a Sun.” Basked in orange lighting, Wesley had no extra accompaniment during its first half, allowing his guitar and impeccably distinctive vocals to shine; halfway through, though, the studio version’s backing rhythm tracks joined him, giving him a fuller foundation on which to solo. Afterward, he played three more songs from the disc—“To Outrun the Light,” “Epic,” and “A Way You’ll Never Be”—as well as “Rome is Burning” (from 1994’s Under the Red and White Sky) and “Mary Will” (from 2014’s Disconnect). He maintained a similar approach during it all, with the exception of occasional echo effects and extended guitar solos. While Wesley’s voice was a bit too booming at times, there’s no denying its characteristic control, and overall it was a brief and modest yet very engrossing forty minutes that hopefully earned him some much deserved new fans.

Marillion came out shortly thereafter, around 9:00 pm, to the opening of fan favorite “The Invisible Man” (from 2004’s Marbles), red lights and smoke, and an ominous video of clouds and soundwaves. Shortly after the band came out, Steve Hogarth appeared on screen to sing the opening lines, dressed in a suit and overlooking the crowd with judgmental authority. (It was the first of many examples of how Marillion elevates its concerts into the realm of dramatic performance art.) Once guitarist Steve Rothery’s iconic central guitar riff came in (if you know the song, you’ll know which one I mean), the audience began clapping along, enhancing the power of the piece. It was an amazing way to start, and it received a standing ovation.

From there, Hogarth changed clothing (into more regal attire) and went into two tracks from their penultimate release, 2012’s Sounds That Can’t Be Made—“Power” and the title track—before returning to Marbles with “Fantastic Place,” which was enveloped in rainbow lighting and footage of a floating body. Later, he dedicated “King” to all the musicians who’ve either died or “gone crazy,” with special attention to David Bowie and Prince, both of whom he wished he could’ve worked with (even though singing on such a record would’ve “made it worse”).  Fittingly, images of such icons scrolled by during the recital, making the sentiment more poignant; then “Neverland” emerged, preceded with another costume change (into more low-key clothing) and complemented by fireworks on screen, patriotic lighting (whether intentional or not), and Hogarth’s impassioned deliveries. In fact, he even laid on the ground at one point, seemingly overtaken by the emotion of the moment.

The encore portion consisted of “Sugar Mice” (from Clutching at Straws, the last Fish-era album) “Easter” (from Seasons End, the first Hogarth-era album), and “Three Minute Boy” (from Radiation). Hogarth sat and watched Rothery solo during “Easter,” and while that may not sound worth noting, it is because it was a subtle indicator of how much he enjoys being a part of such important and meaningful creations; also, he displayed some impressive piano skills during “Three Minute Boy,” which ended with a soft, communal sing-along that served as bittersweet evocation of our shared struggles.

Of course, the most commanding moments came when Marillion honored F E A R, from which they replicated three pieces: “Living in F E A R,” “The New Kings,” and “El Dorado” (the latter two in their multipart entirety). Hogarth prefaced the first of the trio with a joke about Vladimir Putin, and the track itself was paired with colorful pictures of John Lennon, Mahatma Gandhi, flowers, guns, and the thematic like. Similarly, he introduced “The New Kings” with a speech about the super-rich vs. the super-poor before losing himself completely in the performance, which also featured a film depicting villainous socialites ruling over blood red buildings and people cowering in poverty. As for the latter suite, it was matched with more smoke, as well as visuals of sunsets, helicopters, burning books, fire, and flashing numbers. More so than at any other points during the concert, Marillion showed great commitment to and desire in going beyond mere meticulous recreation during these sections, conveying refined theatricality and emboldened social commentary to the crowd. It was beautiful, tragic, and incredibly arresting, just as art should be.