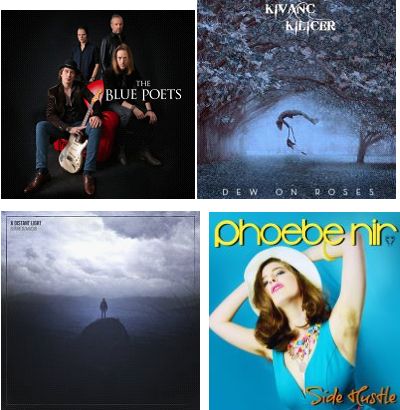 Alternative/blues rockers The Blue Poets are a nationally amalgamated band that includes members from Germany and Australia.  The act was founded by veteran and renowned guitarist, producer, and songwriter Marcus Deml who has had a successful career as a studio and touring musician and as the ringleader of Errorhead.  The Blue Poets is Deml’s latest project where he rules on electric guitar, bringing his sharp, precise, and emotive lines to the fore.  Deml is joined by Phil Steen on bass, Felix Dehmel on drums, and Australian-in-origin frontman Gordon Grey on vocals.

In mid-September The Blue Poets released its self-titled debut album, a batch of blue- steeped and alternative rock-baked numbers that blaze with passion and reflect with clarity and a contemplative balance.  The band has released two singles: “With Your Eyes”, a heartfelt blues-rock ballad with a ripping guitar fireworks from Deml near song’s end, and the rousing “Goodbye”, a stomping rocker through and through, from its brooding blues roots to its grungy alt-rock restlessness.  The tune recalls the cream of the crop of the Alt-‘90s due to its heavy churn of drum ‘n’ cymbals strut, low-end bass rumble, gritty, but groovin’ electric guitar lines, and Grey’s deep and soulfully expressive vocals.

Turkish rock ‘n’ roller may be best known as the frontman of hard-hitting rock band Element, but he has since gone solo, crafting tunes that balance melody with power in the progressive and symphonic rock styles.  Kilicer built up his own home studio in 2010, giving him a musical haven to create his work where he can control all aspects of composition and production.  Kilicer has gained the freedom to express himself as he wants and doesn’t have to fit a specific genre mold or bow to the music industry’s expectations in his native country.

The Verse, Chorus, Verse prog-rocker “Devil’s Thought” comes off of the Dew on Roses EP, which is out on Scarlet Records.  Heavy metal guitar riffs blend with more contemplative guitar lines and eerie synths suspension, creating a foreboding atmosphere.  Kilicer comes with a menacing vocal tone as he exclaims that, “Time kills my pain away.”  Against a hard-smacked, steadily pushing drum beat and reflective keyboard notes, various guitar lines vie for supremacy while Kilicer digs into the remains of a shattered relationship, dolefully proclaiming, “…you walked away / like a thief in the night.”

NYC-located singer-songwriter, playwright, and theater artist Phoebe Nir has teamed up with Tomás Doncker of True Groove Records for the recording and release of her newly released EP, Side Hustle.  Nir’s new record hit the virtual stores on November 4th and includes a cover of Iggy Pop’s classic “Lust for Life.”  The other 5 songs on the EP were written by Nir.  Trumpet master Mac Gollehon appears throughout the record, as well as Doncker on guitar.

Nir puts her own unique spin on Pop’s “Lust for Life”, turning it into an ever-revolving, bright pinwheel of sound and expression.  Wavy, carnival-like organ notes, a pounding, bass line-led beat, and hard-hit percussion collide with Nir’s sharply pushed out, almost breathless vocals.  She proclaims the lyrics with vehemently peppy abandon, sounding like a cross between a punk rocker and a chipper ‘50s singer.  The vibrant sounds all coalesce with Nir’s spunky and shouted out vocals by the end of number, leaving the listener punch-drunk at the ragingly gleeful fun of it all.

Progressive rock artist Burak Ozmucer was born and raised in Turkey, but now resides in New Jersey.  He records under his own name as a solo project and has released several EPs in recent years, including the well-received In Silence in 2013 and now A Distant Light, which came out this past September.

Ozmucer counts among his influences alternative and ambient rock giants like Alice in Chains and Porcupine Tree, respectively.  He balances the heavy with the atmospheric on his 100% DIY compositions.  A central lyrical theme on the EP is the ability to find hope and remain hopeful in times of duress.  The title track is a sporadically fiery metal number that cools off the blazing guitar lines at times with shadowy and luminescent guitar riffs.  This aural juxtaposition creates a feeling of unrest as weightier passages segue into dreamier segments as Ozmucer’s darker, yet reflective vocals float and extend on the choppy to smooth swells of sound.

Single Premiere of “Get Off” by Family Jools