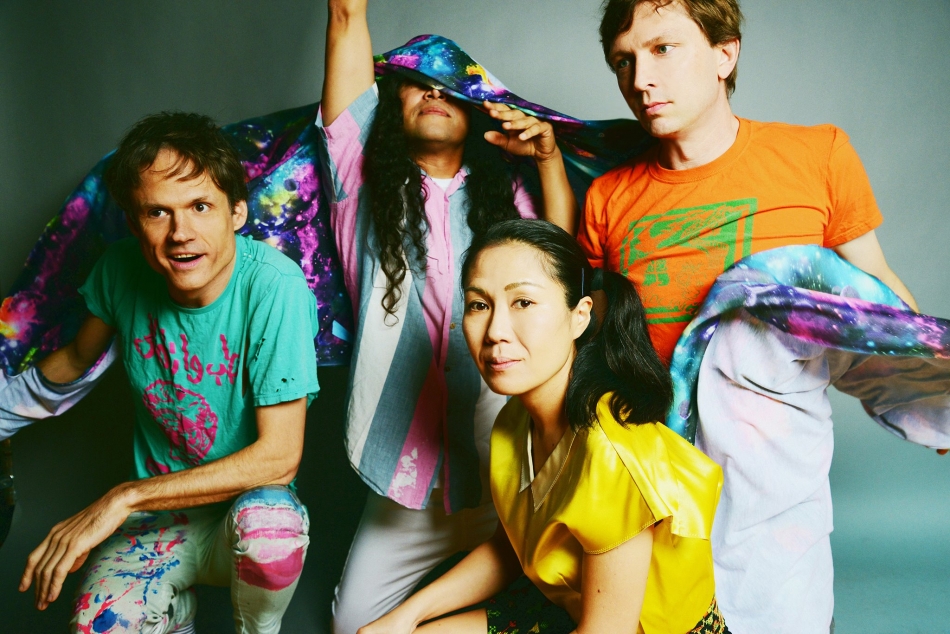 If any artistic group were to predict the coming of our current pandemic, Deerhoof may very well have been first in line. Aptly titled, their latest release for Future Teenage Cave Artists (via Joyful Noise Recordings) uncovers the essence of primitive sounds, pushing aside sonic narratives and structure to a breakdown of the archaic systems that we are so accustomed to. Throughout the record, bassist and vocalist Satomi Matsuzaki, guitarists Ed Rodriguez and John Dieterich and Greg Saunier on drums utilize various aural malfunctions, lo-fi discordance and collapsed drum-fills as artistic choices to be embellished rather than considered erroneous signifiers. Their sprawling creativity is densely packed into tracks like “Zazeet” and “New Orphan Asylum for Spirited Deerchildren”, embedding vastly differing genres and musical language which ring in under the three minute mark. Transitioning from grand collaborations in 2017’s Mountain Moves, Future Teenage Cave Artists takes a drastic shift towards isolation and confinement, allowing ample room to deconstruct ideas to once again take shape through confident intuition. Just as we all must grasp at loose strands to help us establish our own sense of reality, Deerhoof thrives and persists at cultivating a new way of life while breaking the mold of musical systems as we know it.

Deathlist - You Won't Be Here for Long
Deathlist, the moniker of Portland’s Jenny Logan, exudes dark and brooding dreamscapes on her fourth LP entitled You Won’t Be Here For Long, out today on her own label imprint, XRAY Records. Taking heed from an 80’s darkwave and goth roster from the likes of The Cure, Bauhaus and The Jesus and Mary Chain, Deathlist addresses themes of loss, love and pain through improvisational developments in the studio, concocting a hypnotizing dreamscape of embracing sounds to lure her listeners into beautifully swirling visions. “I really wanted to find a more universal way to understand my own particular heartbreak and pain to try and get in touch with something more permanent than myself”, says Logan. You Won’t Be Here for Long rings prominent as a record that even listened to in isolation helps you feel a little less alone.

HEADS. - Push
There’s no shortage of post-punk acts cropping up these days, yet HEADS. stakes their territory in continuing to evolve their sound. Comprised of vocalist and guitarist Ed Fraser, bassist Chris Bruer and drummer Nic Stockmann, the band formed in 2014 after Fraser’s swift move from Melbourne to Berlin. The trio have since toured with the likes of Nothing, Protomartyr and Whores and gained acclaim in their respective hometowns as well as across Europe and the states. After releasing their first full length, Collider, in 2018, they’ve transitioned to more aggressive and noisier grounds as well as successfully drew a collective of collaborators throughout their upcoming sophomore record, Push, released today via Glitterhouse Records. Working with a multitude of names including musicians Kristof Hahn of Swans, Radare's Matthias Feit, Eisenvater’s Markus E. Lipka and Magnus Lindberg of Cult of Luna on board with mixing and mastering, the band have expanded their sound into fully encompassing and commanding abrasions of noise. Working with Alex Edkins of METZ on their latest video for “Weather Beaten”, the threesome contemplate questions of humanity versus their environment, ultimately defeated by the power of nature. “We may fool ourselves into thinking we are in control, but really we have very little”. For fans of The Jesus Lizard and Daughters, get your record players ready.