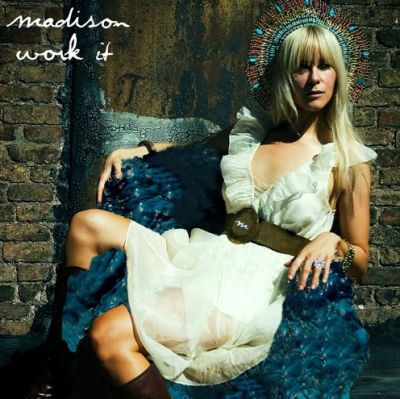 It’s not often that Rebel Noise spotlights pop and/or electronic music, but as metropolitan electro-pop queen Madison has proclaimed in the past, sometimes “pop rocks!” Such is the case with her recent run of on-fire singles that tackle relevant subject matter with fierceness, fun, and finesse.

Madison’s latest track, “Work It”, adds a noir and noisier touch as it growls with grimy reverberations. She changes up the driving pace at times with the savvy placement of staccato rhythms and vocals.

Madison’s shadowy, but coolly assured vocals are surrounded by crisp finger clicks percussion and there’s a sudden swift sing-rap break in the middle of the song that highlights the versatility of Madison’s vocals.

Women’s rights has always been an integral part of Madison make-up, and it’s surfaced in her work before, namely on the 2011 number “Superwoman” from her The Noise Some People Make EP.

Madison raises an energized and engaging ruckus on her tunes and elevates important issues that need attention and protection, especially in this malevolent and malignant, ethically and morally corrupt Trump and G.O.P-led era (with their blind followers being emptily fed by the current administration’s blatant lies and hateful rhetoric) of human rights destruction, environmental, healthcare, and education decimation, rampant bullying and discrimination, and racial, ethnic, sexual, economic, and political division in the U.S.

Song Premiere: “As Yet Unwritten” by Atlas : Empire