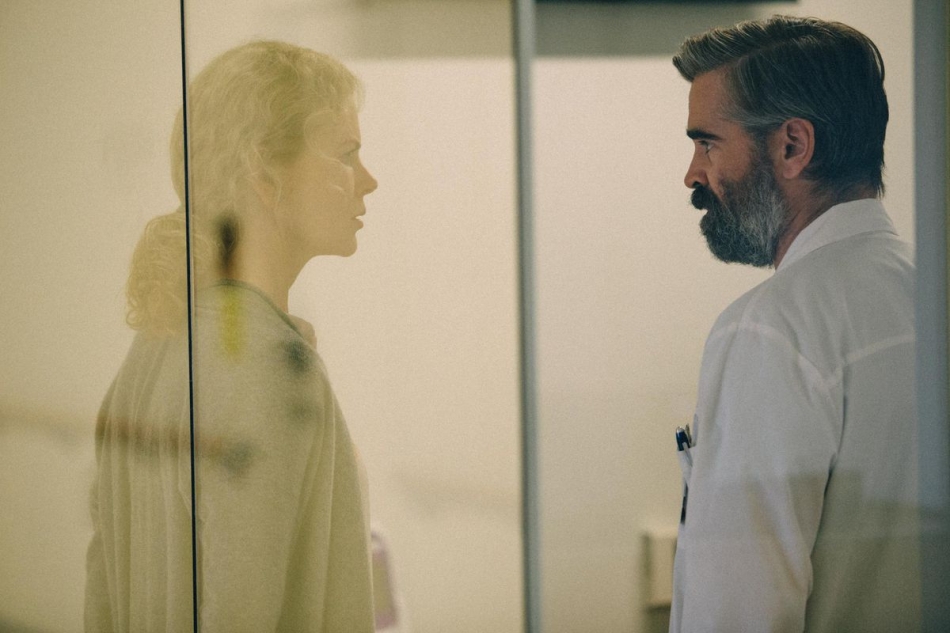 An unsettling psychological drama/horror in line with the director’s previous ilk, Yorgos Lanthimos’ 2017 film The Killing of a Sacred Deer is a revenge tale loosely based on a Greek myth involving Iphigenia, where Agamemnon must pay the price of sacrificing his own daughter for killing a goddess’ deer. Steven (Colin Farrell), a surgeon, secretly befriends adolescent Martin (Barry Keoghan) at his work in the hospital and inevitably introduces him to his wife Anna (Nicole Kidman) and two children, Kim (Raffey Cassidy) and Bob (Sunny Suljic). When his son falls mysteriously ill, Martin confesses that Steven must kill a member of his family, otherwise all three of them will inevitably be paralyzed, refuse to eat, bleed from the eyes and die. Lanthimos’ film doesn’t engage in explaining the how’s and why’s, rather he trusts his viewers to accept a degree of the supernatural, poising a work more of a harrowing mood and style rather than a grounded lesson learned.

Less of a dystopian society than his precursor film The Lobster, Lanthimos’ world in The Killing of a Sacred Deer still entails a universe that resembles our current state yet feels deeply foreboding and skewed in terms of how characters communicate with each other. Unusually flat and formal, Steven’s family speaks rigidly and directly with each other, stating every utterance in a strict matter-of-fact way. The odd friendship that develops between Steven and Martin is full of stiff exactness, with pleasantries including gifts of fancy watches and invitations to dinner. When Steven and Anna’s children meet Martin for the first time, they eagerly discuss bodily changes and plights of puberty without a hint of awkwardness. Each character’s articulate yet dry and deadpan delivery adds to Lanthimos’ eccentric humor whenever the actors do happen to lose their cool or assert a question that would make most of us flush with embarrassment.

Lanthimos pairs jarring, discordant instrumental music to the majority of Steven’s and Martin’s interactions, further depicting their odd friendship as ominous and harrowing. What begins to unravel as a pseudo-stalker situation and an incessant pull from Martin towards Steven and his family turns far more horrific, primarily due to Martin’s delivery of Steven’s foreboding choice and the boy’s detachment. His loner persona and lack of emotion when it comes to death, describing how his father’s actual passing was less upsetting than finding out the way him and his father used to eat spaghetti was not actually emblematic to the two of them, constantly puts the viewer on edge anticipating what he’s driven to do next. Steven’s predicament also sheds light on his stubbornness and ego, consistently taking a backseat course of action rather than asserting himself and his needs in order to save his family. The Killing of a Sacred Deer teeters on the edge of black comedy and alarming suspense, perhaps occasionally losing some of its message in its delivery. However, Lanthimos’ craft and humor remains absolutely unique in tone, constructing a plot that could have fallen to a predictable conclusion if it wasn’t for his unwavering and unique vision.