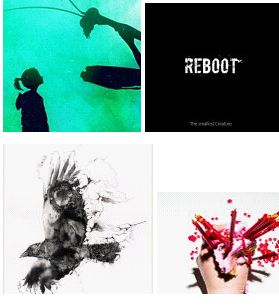 Short, but informative reviews on songs by alternative rock bands The smallest Creature and The Departure and electronic rock bands Jane in Space and diNMachine.

The mesmerizing “Reboot” swirls with heady dream-rock energy, starting off with a brief bit of briskly strummed acoustic guitar and up-close vocals from Marnerides.  A soft hush of pulled symphonic strings materialize from the ether, ushering in a fuller sound of bassline undertow and a quickly marching drum beat.  The song opens up on the chorus, sweeping by with a mellifluous flow of distorted guitar riffs, a plunging bassline, cymbals scintillation, and dynamic drum hits.  Though it all, Marnerides sings sweetly in a longing tone about, “Tonight you’re free / Tonight you’re clear / Tonight it’s all been paid / You can go.”  Listeners will want to stay and repeatedly spin this captivating tune.

Jane in Space – “Feel It Alive”

Salt Lake City, Utah-residing alternative rock band The Departure embarked on a musical voyage with the launch of its 7-track Gateways EP.  The band is made up of teen to twenty-something musicians who have produced a cohesive, serious, and accomplished record that belies their young age.  The Departure’s sound recalls bands like Blink-182, Silverstein, and Sum 41and the band seems like a perfect fit for the Warped Tour circuit.

“Gateways” is an involving hybrid track that blends the alt-rock guitar power with questioning lyrics, quieter to emotive vocals, and fluidly dancing piano runs.  There’s plenty of energy to be found here, but also a more reflective side where the lead singer exclaims urgently the bleak lyrics, “Turn the lights off / Shut the door and / leave me to my fate.” amid the craggy guitar burn, cymbals flash, and emphatic drum thumps.  The subject matter may be harsh, but the propulsive churn of the thickly-textured guitars and drum push lift the song up from its lyrics-based despondency.

One of the singles off the album, “e.W.A.F.T.” is more a remixed reimaging than an original track as it is based on a song by Earth, Wind, & Fire that was run through Melodyne software and bolstered by bass and a beat and diNMachine’s members jamming out to it.  The result is an exciting, kinetic, and pressing forward instrumental of trippingly fast tempos, soft washes of expanding syths, reflective, floating keyboard notes, and deeper piano-like motifs.  A blaze of cycling electric guitar riffs raises the intensity even further, while funky, processed wordless vocals that sound like keyboard notes materialize near the end of the number.